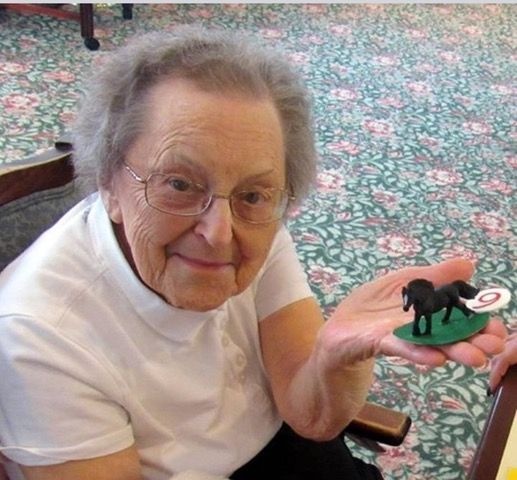 Alda graduated Medford High School in 1946 and became a worthy advisor of the International Order of the Rainbow for Girls, Medford MA. She worked at Prudential insurance as a secretary and bookkeeper until the early 50s. On a vacation trip to Nantucket she met her soon to be husband Robert M. Barrett a tour bus and cab driver with Barrett's tours. After Robert earned a certificate in watch repair from Massachusetts Trade Shops Schools in Boston, they were married at the West Somerville Congregational Church in 1951. They lived in Somerville a few years before building their home together in Harvard. Alda continued to work as a bookkeeper for local businesses in Harvard until becoming a mother and full-time homemaker in 1958.

She was survived by her son Jeffrey B. Barrett, his wife Roberta (Robin) H. Barrett, and granddaughter Marguerite Lynne Barrett of Bolton, her niece Eleanor (Emerson) Neil of Methuen MA., her nephews George and Warren Blauvelt of Hinesville, Georgia, and niece Lorraine (Blauvelt) Griffith of Pennsylvania, her sister E. Mavis Rockwood and nieces Sandra Poucher and Marjorie Potvin all of Lakeland Florida, her sister Luella Nordstrom of Lake Placid Florida, and nieces Susan Loiselle of Chelmsford and Lisa Dupont of Gardner.