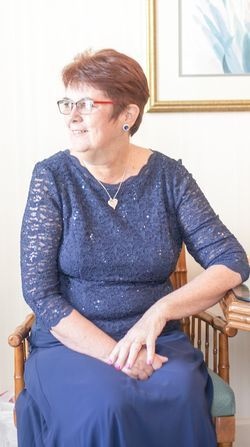 Anne Wetherbee Teague -- July 17, 1954 – June 4, 2016
Anne passed away peacefully at her daughter’s home in Rockland, MA with her family at her side after waging an amazingly courageous battle against pancreatic cancer. Anne’s defining characteristics were making the lives of others better, being clear where she stood, and knowing the meanings of commitment and love.
Anne was a graduate of Littleton High School and Fisher Junior College and worked at Digital Equipment Corporation for 15 years. While being a full time mom she raised three children. Anne operated a successful Direct Mail Business in Amherst, NH and volunteered as an Amherst Junior to help enhance the community. She was a Girl Scout Leader and helped at her children’s schools. She always found time to lend a hand to anyone in need.
Anne is survived by husband William “Pete” Teague of Annapolis, MD, her mother Doris R. Nixon of Glendale, AZ, two daughters, Jennifer Marie Teague of Allston, MA, Andrea Teague Davis and her husband Ian Davis of Rockland, MA; a son Daniel Peter Teague of Clayton, DE, and two grandsons, Damian and Brandon Teague also of Clayton, DE. In addition, she is survived by her sister Cathy Wetherbee Snell of Riverview, Florida, her brothers Ernie Wetherbee and his wife Susan of Glendale, AZ, Joseph Wetherbee of Surprise, AZ, Ralph Wetherbee and his wife Susan of Buzzards Bay, MA, a brother in law Paul Teague and his wife Mary Patricia of Middleton, MA. In addition, Anne is survived by her nieces Shana, Jessica, Caitie, Lauren, Laura, Jenna, Brianna, Madison, and Destiny and her nephews Joey, Matthew, Justin, John, Jimmy and Jack. Anne was predeceased by her sister Rita Cormier of Windham, NH, her father Ralph Wetherbee of Hudson, MA and her Step Father, Norman Nixon of Littleton, MA.
Visiting Hours will be held at the Badger Funeral Home, 347 King Street, Littleton on Thursday June 9, 2016 from 6-9 pm. A Mass of Christian Burial will take place at St. Anne’s Church, 75 King Street, Littleton Friday,  June 10 at 10 am. Burial at Westlawn Cemetery, Littleton. In lieu of flowers, Anne asked that donations be made to the Pancreatic Cancer Action Network, www.pancan.org  (And #nevertrump).  ﻿