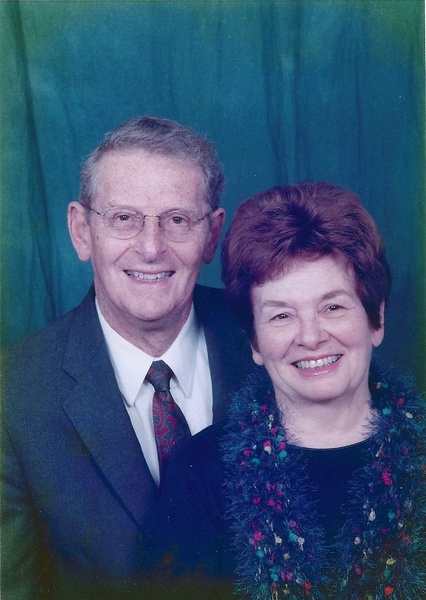 Arline F. Marteney, 87 and a longtime Harvard resident passed away peacefully at her home on Sunday April 24, 2022. She was the wife of the late Eugene Marteney.

Arline was born in Santurce, Puerto Rico on November 12, 1934, a daughter to the late José and Frieda (Haynes) Fránquiz. In 1944, her family came to the U.S. while her father completed his doctoral studies at BU José moved the family to West Virginia where he became the head of the philosophy department at West Virginia Wesleyan in Buckhannon. There Arline completed grade school and then herself attended Wesleyan. She double majored in Home Economics and Art and graduated Magna Cum Laude. While there, Arline was active in the Alpha Gamma Delta sorority. Arline had a summer job in the chemistry lab where she was assigned a TA to help make solutions. The TA was Eugene Marteney and from that connection grew a relationship that lasted from their marriage on the day after their graduation May 30th 1956 for over 52 years until his death in 2008.

As a couple, Arline and Eugene moved from West Virginia to the Boston area while Eugene attended post graduate studies at BU. Soon after their first child Cheryl (Cherie) was born, Eugene left academia to go into the field of engineering and was able to find work first in Cambridge, then Concord. Arline and Eugene looked to the suburbs for a place to raise their children. After their second child David was born, they moved to Harvard in 1961 where they felt an instant sense of community. With the arrival of their third child Tamara, they were ready to settle into a home of their own and bought their current house on Tahanto Trail in 1965. Arline and Eugene spent countless hours putting their own personal touches on their home. Their gardens, flower, vegetable & fruit trees, needed constant attention and were glorious in their heyday to become a stop on Garden Club tour.

As a young mother, Arline continued with her oil painting, taught art lessons in the home and was a substitute art teacher at the school. She started the art show at the Congregational Church as part of the Apple Blossom Festival. Later, she switched media to watercolor under the tutelage of Agnes Abbot. Always crafty, she created seasonal decorations for the Congregational Church from fashioning blown eggs to be the people of the congregation complete with suit coats for the men and Easter hats for the women, to elaborately clothed wise men and salt dough angels for the Christmas scene. The art of her apple pies was renowned and were sold out at the Apple Festival almost before they arrived to the table. Experiencing art and architecture wherever she travelled continued as a passion for Arline throughout her life.

Arline was a big supporter of the Scouting programs, as a child from Brownies through Seniors, and later in life as a leader and in leadership training. She encouraged her children in their scouting experiences and co-lead the senior Girl Scout troop along with Eugene. She imparted a love for the outdoors and a make-do attitude and to treat challenges as "adventures".

Arline and Eugene were very involved with the Harvard community and beyond. They were part of the first 4th of July committee that established a tradition of celebration that continues to this day. As part of the adult chapter of the AFS, they hosted Muriel Jolie from France and welcomed other exchange students to their home. When her children became independent, Arline found a way to serve the community as the Congregational Church administrator for 25 years. Through the church, Arline and Eugene helped plan and participate in a Habitat for Humanity home building adventure in Guatemala where Arline's fluency in Spanish was an asset.
In their retirement years, Arline and Eugene spent their winters in their Casa Rosa in Puerto Rico, where Arline reconnected to her roots. During the summer, they would travel to Europe and spend the rest of their time in Harvard. They had a very full life.

Arline is survived by her children; Cheryl Ladeau and her husband Joe of Winchendon, David Marteney and his wife Melissa of Harvard, and Tamara Marteney of Warren, VT. She is also survived by her grandchildren Matthew Marteney, Robert Manson, Alyson Marteney, Marla Davidson, and Seth Davidson.

Visiting hours will be held on Thursday May 5th from 6-8 pm at the Badger Funeral Home, 347 King Street, Littleton. A private graveside service will take place on the next day at Bellevue Cemetery in Harvard. A Celebration of Life will take place at the Harvard Congregational Church on Saturday May 28th at 11:00 AM, followed by an ice cream social at the family home.