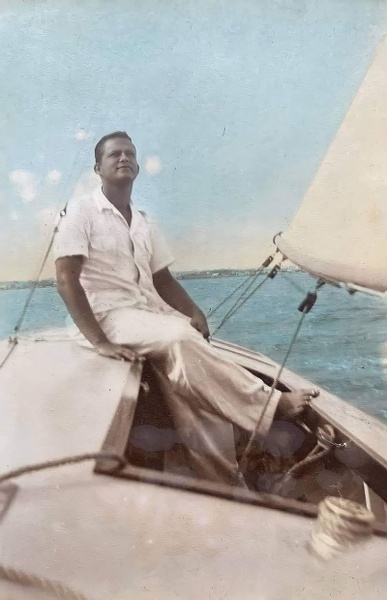 At the age of 95, Augusto Bernabe Sanchez Echavarri succumbed to a lifelong battle against time and gravity, more commonly known as old age.

Augusto was a man who adored his wife, loved his children and grandchildren, was proud of his Basque heritage and who absolutely obsessed about the quantity of his food and the quality of his drink.

Brought into this world in 1926 in Havana, Cuba, Augusto was born into a world of wealth and privilege. He spent his youth swimming, sailing, fishing the Caribbean for swordfish, learning the piano and to his father's dismay, running-up thousand-dollar bar tabs at the Havana Yacht Club.

Young Augusto was both an accomplished pianist and sailor, having won many of the club's regattas. Unfortunately for his wife and kids, he gifted his gold medals to others — opting instead to keep a dented tin cup for a race he was particularly proud of, the Race of the Daiquiri.

That race started with drinking a daiquiri at the Havana Yacht Club then sprinting, rowing and sailing to a distant point on the horizon. The first team back to finish a daiquiri won the race. The quirkiness of this particular race truly defined Augusto's character-eccentric, talented and fun.

It was at the age of 29, while attending the University of Berlin for Brewing, that Augusto met the love of his life, Elfriede Lange. One year later they were married in a small chapel within the Basque country (Spain). The Pope blessed their wedding and they remained married until Augusto passed away, 65 years later.

Armed with two engineering degrees and an MBA from the University of Chicago, Augusto held a variety of jobs, including being a gentleman farmer in Spain, a brew master in Cuba, a university teacher, a plant manager in El Salvador and various head of operations positions. To the envy of people everywhere, he held a job inspecting breweries in the Caribbean.

Over his lifetime, Augusto witnessed the overthrow of Cuba by a former high school classmate, Fidel Castro. He walked the rubble-strewed streets of Berlin after the war. He listened to stories of torture that each of his Basque fishermen friends endured in Spain under Franco. And as plant manager in El Salvador, he saw the poverty and suffering caused by dictator governments in Central America and even had an uncomfortable encounter with Somoza of Nicaragua.

As a result of his life experiences and background, he had fascinating stories to tell. He'll be sorely missed by Elfie, who was the love of his life, his sons Javier, Bernie and Miguel – by their wives and his four granddaughters, Marisa, Amanda, Anastasha and Katalina.

The celebration of his life will take place at a future date.