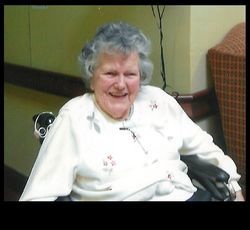 Barbara (Fagan) Coole, 92, of Littleton, passed away on June 29, 2016, at the Life Care Center of Nashoba Valley in Littleton.  Born in Watertown, MA, on January 19, 1924, she was the daughter of the late Arthur and Helen (Dolan) Fagan, and she was the wife of the late Simeon Coole, Jr., who died in 1983.  She grew up in Watertown and was a graduate of Watertown High School, class of 1941.  She married Simeon in 1945, and they made their home in Watertown before moving to Littleton in 1956.  Barbara worked in the Littleton Middle school as a Cafeteria Manager while raising her children, and later worked at Digital Equipment Corporation before retiring in 1987.  She was a member of St. Anne’s Church and St. Anne’s Sodality.  She belonged to a bowling league and enjoyed playing cards, bingo, knitting and dancing.  She was also an avid reader.

She was predeceased in death by her brothers Arthur and James Fagan, and her son-in-law David Gorham.