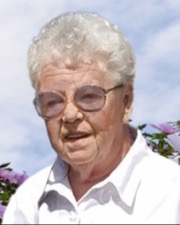 Barbara was born on Aug 30, 1935 in Cambridge, MA to Frank and Josephine (McCloud) Hall. After their marriage, Barbara and Bob raised their three children Roberta, Maureen, and Timothy in Boxborough, MA.

A passionate New England sports fan, Barbara enjoyed watching the New England Patriots and the Bruins. She was loved for her quick wit, her infectious smile, and her kind, compassionate spirit.

Barbara was preceded in death by her husband, Bob, and her daughter Roberta. She is survived by her daughter Maureen Cullinane of Pepperell, her son Timothy Hardy & his wife Roni of Westford, MA, as well as her grandchildren; Melisa Cullinane, Andrew Hardy, Jeremy Hardy, Amanda Bouffard , Shana Hardy, and George Hardy, her great grandchildren; Haley Monahan, Grayson Delgado, Tyler Toomey, Levi Matta, Kiana Hardy, Alexis Hardy and many cousins, nieces, and nephews.

A memorial service will be held to remember the life of Barbara on November 5th at the Boxborough South Cemetery, Burroughs Rd, Boxborough, MA at 2:00 pm, followed by interment.