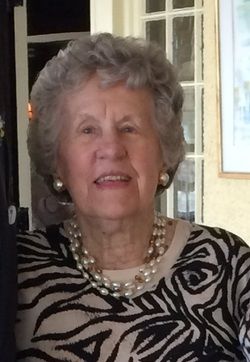 Bertha “Kacey” (Kuciskis) Duffy, 95, of Tahattawan Rd. Littleton died peacefully November 11, 2016 surrounded by her loving family. She was born in North Chelmsford September 4, 1921, was raised in Dracut and settled in Littleton in 1945.

Kacey began her professional career as a Private Secretary serving the Army Corp of Engineers based in Saskatchewan, Alaska supporting the construction of the Alcan Highway. Following her return to Massachusetts she married and fully embraced her role as homemaker and mother to her 4 children. Kacey returned to the workforce as Administrative Assistant to the President of Isoreg in Littleton serving in that role for 13 years. She was an incredible cook, still creating new dishes and clipping new recipes at 95.

Kacey had a highly competitive spirit and a passion for games, including bridge, cribbage and her favorite Scrabble. She was an eternal optimist with a great sense of humor who never lost her love for life. She was beloved to so many of her neighbors, friends, co-workers and her large extended family and she will be greatly missed by all who had the privilege of knowing her.

In lieu of flowers, for those who wish, contributions may be made to Friends of Littleton Council on Aging, c/o Treasurer Box 132, Littleton, MA 01460.