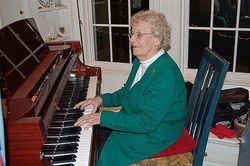 Kitty was born to Irish immigrant parents Nora Maloney and Martin Clair and was raised in Medford, MA along with her 7 brothers and sisters.

Born into Irish music Kitty grew up playing the concertina, just like her mother had but would go to her aunt’s house to play the piano. All of her brothers and sisters also learned to play instruments such as the tin whistle, flute, fiddle and the accordion.  At the age of 11 her family bought a piano.

Kitty went on to play the piano at glee clubs, for recitals and would accompany dancers. She would soon join the orchestra at Medford High School and was later offered a scholarship to the Boston Conservatory of Music.

In 1938 Kitty would continue on her own to practice and play all around with musicians including “the Debs’s of Rhythm” who were heard every Sunday on WMEX radio. They also played at many college dances and it was at one of those that she was introduced to a sax player named Eddy.

She and Eddie would marry in 1940, and raise their four daughters in Lexington.

Kitty would continue playing the piano herself in many different venues and as part of the Comhaltas Ceoltoiri Eirann was inducted into the Irish Music Hall of Fame in 2005 at Boston College in her mid fifties. Her portrait still stands in the Burnes Library on campus.

In addition to her love of music Kitty also had a love for her family, animals, and her several trips to Ireland over the years.

Kitty will be waked at the Badger Funeral Home 347 King St. Littleton, MA on Tuesday August 30, 2016 from 5-8 PM. There will be a funeral mass held at Saint Elizabeth’s 89 Arlington St, Acton, MA at 10 AM on Wednesday August 31st.