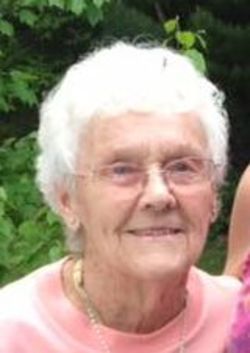 Charlotte (Todd) Hartwell 93, of Littleton, MA, passed away quietly at Emerson Hospital in Concord on Aug 23, 2016  Daughter of the late Lewis T. Todd Sr and the late Lillian R. Todd, she was born in Wellesley, MA and was a life-long resident of Littleton.  Charlotte was affectionately known as "Charshee" to her Todd family and as "Blondie" to her Hartwell family members.
Charlotte worked most of her life at Fort Devens in various Civil Service positions, and was married for many years to the late Charles A. (Lonnie) Hartwell Jr who predeceased her in 1984.  She and Lonnie (known to family as "Pappy") owned extensive parcels of land on Hartwell Ave in Littleton and opened the "Hartwell Hill Ski Area" there which taught many of Littleton's children to ski and which was enjoyed by hundreds of area skiers in the 50's, 60's and part of the 70's.
Charlotte was a lovely lady whose smile and 'vim and vigor' delighted everyone.  She was very devoted to her grand-nieces and grand-nephews and all of her step-grandchildren.
She is survived by her sister Carol Anne (Todd) Bennett and husband Win of Mason, NH.  Also by nieces Sandra Ellis and husband Bruce of ME, Lisalee (Banks) Howard of Littleton, Gabriella Lizotte of MA, and Linda Nichols of HI.  Nephews Randy Atkins and wife Dianna of FL, Lewis Hunt and wife Erodia and Miller Hunt all of TX.  Her grand-nieces Britany Partridge, Kimberly Lizotte and Sarah Lizotte of MA, Kimberly Metcalf of ME, Robin Lewis of NH, Wendy Shaw of ME,and Nicole Hamel of FL.  She is also survived by her grand-nephews Matthew Gates and Iryna of NY, Benjamin and Jonathan Howard of Littleton, Ian Atkins and wife Erin of CA, Scott Lewis and family, Jesse Ellis of ME, and John, Lewis and Thomas Hunt of TX.
Step-children are Charles A. Hartwell lll of AR and Joy (Hartwell) Peach and family of Lancaster.  Her step-grandchildren are Stacy (Hartwell) O'Driscoll of Maynard, Steven and Scott Hartwell, Charles (Chucky) Hartwell all of MA and Courtney and Samantha Hartwell of Littleton.
Blondie will be greatly missed by Debbie Hartwell of Littleton and by her life-long friend Anita Dolan, her husband Richard and their son Ricky of Maynard.  Mark Chaisson of Littleton was devoted to Blondie's well-being and was loved as a 'grandson' over the years.  Charlotte's in-home care provider Donna Psaltakis of Littleton made her days happy ones.
Charlotte was predeceased by sister Louise E. Hunt, brother Lewis T. Todd lll and a niece Judith A Burnham.

A private Memorial gathering to be conducted at Hartwell Hill at a time convenient to the family.  In lieu of flowers, a donation may be made to The Humane Society of the United States in Charlotte's memory.