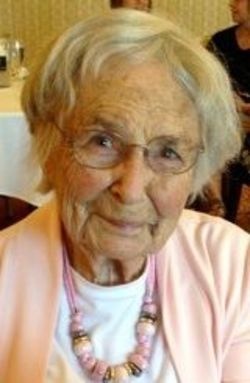 Eleanore (Adams) Payne, 93, of Littleton and Bedford, died on March 12, 2016 at Emerson Hospital in Concord. She was born in Auburn NY on December 20, 1922 daughter of the late Arthur and Elizabeth (Main) Adams and was the wife of the late James C. Payne. She grew up in Auburn and was a graduate of Auburn High School and later attended Simmons College. After she married James, they traveled as he was a Colonel in the United States Air Force. They settled in Bedford, MA, and they later moved to Littleton in 2000.  Eleanore was a member of the Littleton Congregational Church, as well as a member of the Social Club of the COA. She loved knitting, bridge, mahjong, baking, shopping and had a special spot for candy.

Mrs. Payne is survived by her children James Payne Jr. and his wife Patricia Ann Payne of Billerica, and Nancy, and her husband Mark Mizzoni of Littleton, a sister Jean Marshall of Auburn, NY, 6 Grandchildren: Christopher, Elizabeth, Brian, Erin, Michael and Matthew, a great grandchild Nora, and “one on the way.”  She was also the mother of the late Elizabeth Payne Rock and the sister of the late Arthur “Jimmy” Adams Jr.