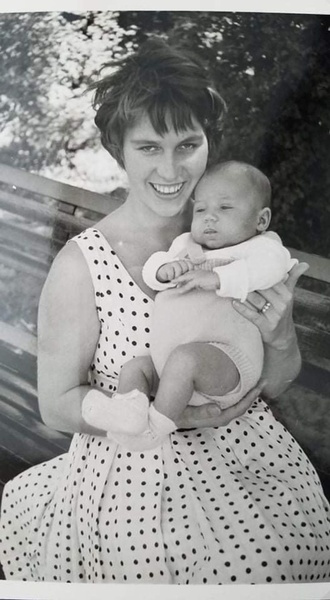 After a long, well-lived life that included its fair share of hardship and perseverance, pain and joy, Elfriede Lange Echavarri (Elfie) finally lost the good fight. She was 86.

Elfie was a survivor, and if she had a superpower it would've been the sheer strength of her personality that brimmed with optimism, determination and love – traits that allowed her to face and overcome the many challenges life threw her way.

Born 1935 in Berlin Germany, Elfie grew up during the war and its aftermath. At the age of five, she experienced the terror and chaos of being led into bomb shelters with other crying children to escape Allied bombs. At one point, her mom gave her cyanide pills should the shelters collapse.

To escape the bombs, her family moved to her grandmother's farm in Dargun. As the war reached its conclusion, the village was overtaken by Russian soldiers and Russian officers appropriated their farm and home.

For three weeks her family hid in a hayloft, her mother and grandmother scavenged food from the scraps fed to the pigs under the cover of darkness. From the safety of the hayloft, a young Elfie heard the killing of her neighbor and the subsequent brutalization of his family.

Captured early in the war, her father would remain a prisoner of war for over eight years in a Russian camp and was thus absent for a good portion of her childhood.

When the war ended, her family moved back to West Berlin. Here she hung out with her sister and a close-knit group of friends playing in the rubble that was Berlin, smoking cigarettes, and in Elfie's case, skipping violin lessons. Elfie had fond memories of walking with her sister, eating sauerkraut with her fingers from a paper cone. It was her comfort food.

At the age of 17, life threw Elfie another curve. While riding on the back of a moped, she was struck by a double decker bus and spent 11 months in a hospital. While she kept her leg and arm, she suffered chronic pain for the rest of her life, the extent of which she hid even from her family.

Shortly after leaving the hospital, she met an eccentric university student from Cuba and within one year, and with the blessing of the pope, she was married in a stone chapel in the Basque country of Spain. She remained married to Augusto for 65 years, until his recent death.

Her life with Augusto took her to other countries and adventures. She learned to speak Spanish fluently within two months on a family farm in Spain. As she would later say, not learning was not an option because she loved to talk. And yes, she was a talker.

She acquired a taste for oysters while living in Cuba. One night, to the smirking amusement of Cuban waiters, a nine-month pregnant Elfie ate six dozen oysters.

Because of her vivacious nature, blonde hair and blue eyes, she and Augusto were often compared to Lucy and Ricky Ricardo. And while Elfie was definitely a Lucy, her sons were quick to point out that Augusto was no Ricky Ricardo!

Elfie showed her inner-Lucy during the waning days of Cuba when it was unclear whether Augusto could leave the country before Fidel Castro shut the borders. They were at the consulate, which was getting ready to close for the day, and no one knew whether it would reopen.

Elfie could see they wouldn't make it to the plane because her green German passport was at the bottom of the pile. So she grabbed her stomach, let out a shriek and fell to the floor. She was nine months pregnant so it was an easy sell.

Mortified, Augusto fled the room, but the Cuban officials rushed over and after "reviving" her asked what else they could to do. Calmly she pointed to the pile of passports and said, "green one, third from the bottom." The passports got stamped and she, Augusto and a young Javier were on a plane to Chicago.

Family was everything to Elfie and she fiercely loved her husband Augusto, her sons Javier, Bernie and Miguel along with their wives Theresa, Katherine and Stephanie.

She unconditionally adored and treasured her grandchildren: Marisa, Amanda, Anastasha and Katalina. When she first learned she would become a grandmother, she immediately gave up drinking and smoking – cold turkey – and then became their confidante and biggest cheerleader throughout both their childhood and adult lives.

Her passing leaves a huge hole in the lives of her family, friends and that of her best friend of 75+ years Brigitte, who is now the last of that close-knit group of friends who once roamed the postwar streets of Berlin.

Elfie's legacy to her granddaughters is that of a strong women, one who met life's challenges with resolve, grace and good humor. Rest in peace Elfie, it's been a long journey and you've earned it.


A Memorial Service will take place at a later time.