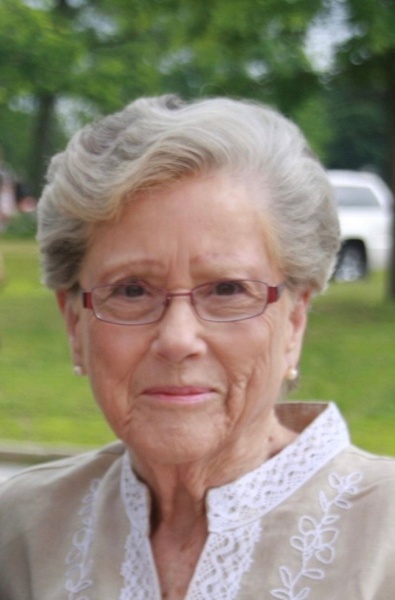 Elizabeth "Betty" Ashe, 90, passed away on Feb. 4, 2021, in her home of 45 years, on Myrick Lane, from complications of Alzheimer's disease. She is survived by five sons, four of whom live in Harvard, and by her eight grandchildren and three great-grandchildren.

A Depression-era child, Betty grew up in Bridgeport, Connecticut, economically poor but rich in love of life and laughter. She often recalled putting newspaper inside her shoes to cover the holes and coming home several times to find a sibling waiting on the doorstep to let her know that they had moved because rent was due. Her two older brothers served in—and survived—World War II, and her older sisters were Rosie-the-Riveters, working in the industrial facilities that powered the war effort. Her youngest sister Kate, the only surviving sibling, lives in Burlington, Vermont. She loved her two brothers dearly, but she had a special love for her sisters, all of whom were blessed with a contagious, joyful laughter that could fill any room. They just loved to laugh.

Betty was married to Bill Ashe, a former Harvard Selectman and prominent conservationist, for 65 years before he passed away in 2017. Betty and Bill first met when she was five years old. At the time, Bill was serving as the ring-bearer and Betty the flower girl at the same wedding. They married in 1952 and lived together in Atlanta, Washington DC and Albuquerque before moving to Harvard. Although she often chided him for being stoic and unromantic, Bill was devoted to Betty and their enduring, steadfast love was evident to everyone who knew them.

Betty was a dedicated mother and the fact all five of her sons have survived her is a remarkable accomplishment. A collectively raucous bunch, they were fond of pranks, playing with dangerous things and breaking her furniture. Through it all, she managed with laughter and a firm but gentle style that was equal parts zoo-keeper, football coach and emergency room nurse. Later in life, she met former Secretary of State Madeleine Albright at a book signing. Secretary Albright inscribed this note in her book: "Dear Betty, there is a special place in heaven for the mother of five boys."

To Bill's consternation, the Ashe home was never an empty nest. Shortly after the boys had left, they were replaced by grandchildren. Nothing made Betty happier than being surrounded by her grandchildren and she made sure that "Grandma's House" was the base of all family events.

Betty delighted in working for others. From 1978 to 1996, Betty managed a program to organize local churches and families to offer food and support to homeless shelters in Worcester. She was also a fixture at town elections, working the polls and greeting voters. And even though she never ran for local office herself, she made Bill's many successful bids for Selectman and other town committees possible. She was also a talented artist who enjoyed making Christmas ornaments and painting Thanksgiving pumpkins that she shared with family and friends . . . and with mail carriers, teachers, grocery store clerks, bank tellers, toll booth operators and anyone else who happened to cross her path.

So, what was her legacy? Mainly, it is in the example that she offered to the family and friends that survive her. A legacy of kindness, determination and laughter . . . of finding a way to lead a good life, raise good children, keep good friends, and support good communities. Betty Ashe was a woman of her time. A sister, a wife, a mother, a grandmother and a friend. A woman who left everyone she met better for it.

She was loved dearly and she will be missed terribly.