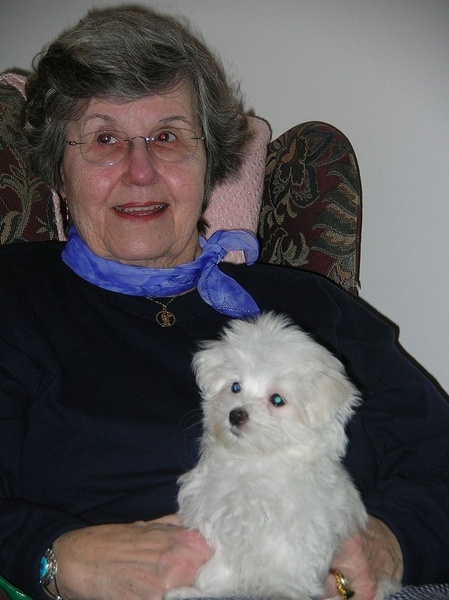 After WW II, she met and married Arthur C. Olsen. They lived in Detroit then moved to the Pittsburgh area until the mid-1960's when Joyce, Art and their three boys moved to Clinton, NY. Joyce enjoyed the small-town life in Clinton and after a few years started working part time at the Clinton Travel Agency. Thus began her lifelong love of travel and seeing the world. She was also active in the community, church and schools---taking in all the boys' games and events. She particularly liked being at the Clinton Arena for hockey games and was an avid supporter of the Kirkland Art Center.

After moving to Pittsburgh in the mid-1970s for Art's job, they bought the Scenic Travel Agency in Munhall, PA. During her 25 year career as a travel agent, Joyce travelled to over 100 countries and was very proud to have taken one of the first groups of Western tourists into China in the late 70's or early 80's. It wasn't all fun though—She survived a terrorist bombing at the convention hall in Manila during a travel agent convention and a capsized tour boat in the Galapagos Islands. It was during her time in Pittsburgh that Joyce became a Steelers fan—She and Art had seasons tickets, and even after Art's death in 1978, Joyce always attended home games—and several of the Steelers' Super Bowl wins.

In the mid 90's she sold the agency, retired and moved to Middletown, RI, near Newport—thus fulfilling another of her lifelong dreams—to live by the ocean. Not one to rest in retirement, Joyce converted a small beach cottage into a lovely bed and breakfast—Peek-a-Vue Cottage—where she hosted visitors from around the country and the world. It was also a great place for her grandchildren to visit "Amie" as she was affectionately called. It was during this time that she also became a fan of the Patriots and of course the Red Sox.

After about 10 years, Joyce re-retired and moved to Groton, MA where she resided at Rivercourt Residences—an independent and assisted living facility.
Throughout her life, Joyce loved and was devoted first and foremost to her family. She was always there to help out with her grandchildren, and regularly travelled to see them. She was overjoyed to meet her two great grandchildren as well. Joyce also had a love for meeting people—her house and table were always open to friends, family and guests.

Joyce was predeceased by her husband Art in 1978. She is survived by her brother Phil Growe and his wife Edie of Newcastle, WY, sons Jim Olsen of Sheridan, WY, Mark Olsen and his wife Michaela of Bedford, NH and Rob Olsen of Groton, MA, grandchildren Kristina Dolan and her husband Andrew of Yuma, AZ, Mark T. Olsen and his wife Emily of West River, MD, Luke Olsen of Florida, and Maddie Olsen of Groton, MA, and great grandchildren Savannah Olsen and Jakob "JJ" Dolan. She also has cousins and many friends scattered around the country.

In light of the Covid-19 virus (which Joyce recovered from in May 2020), the family will have a memorial service at an appropriate time in the future.

Memorial donations may be made to: