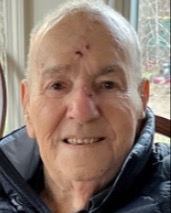 Frank Revere Martell, Jr. age 93 of Groton, and formerly of Wilmington passed away peacefully on Monday, December 5, 2022. He was the beloved husband of 72 years of Phyllis (Jones) Martell, who was at his side.

Known for many years as Bucky by his grandchildren, Frank was born in Cambridge, Massachusetts on October 30, 1929, the oldest of seventeen children to the late Frank, Sr. and Anna (Varney) Martell.

In 1946, Frank left high school and enlisted in the Army and proudly served the United States during World War Two. After completion of his service in 1948, he returned to high school, graduating from Cambridge Rindge and Latin in 1950.

One week after his return from service, Frank met Phyllis at a friend’s wedding. He married her in 1950 and together they raised their six children.

Frank worked for 42 years at Raytheon Corporation as a Vacuum Tube Technician until his retirement.

His interests were varied; gardening, birding, woodworking, fishing, watching TV sports, and more recently; addicted to the Game Show Network; but his main activity was as an avid cribbage player, teaching his children and grand-child how to play the game. Almost all family get togethers would include challenging him to a cribbage tournament.