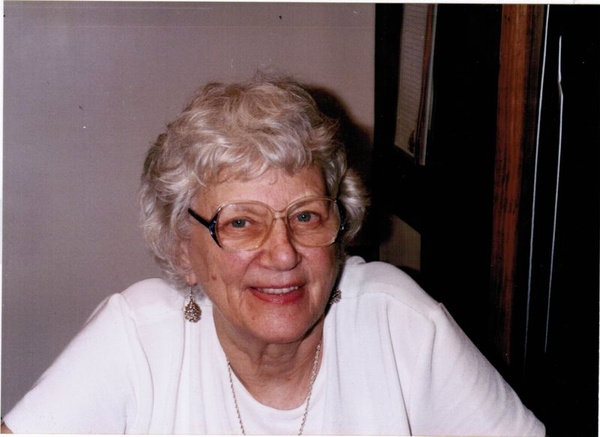 Grace Lindquist, lover of people, music, peace and justice, died Sunday, July 30, at age 98. Her passing was peaceful as her indomitable spirit bowed to a worn out body. A memorial service will be held on Sunday, September 10, at 3:00 p.m. at the First Church Unitarian on Foster Street, Littleton, MA.

Grace was born on June 12, 1919, in Rochester, NY, the fifth of six children born to Gertrude (Heckman) and Lambert J. Van Dam. She was married to Carl G. Lindquist for 43 years and to William D. Hammond for 15 years.

In 1960 Grace and Carl arrived in Littleton with their two children, David and Jeanie. She became active in community affairs, Unitarian church life, and local political organizing. She attended Unitarian conferences at Star Island, NH, for more than 40 years.

Music was always at the forefront of her life. She sang and played piano, guitar, viola, recorder, and many other instruments. In 1965 she began teaching guitar and piano. She made friends with all 330 of her students and their families. With some of her students she created a jug band that performed for years locally. She gathered other musicians around her for jam sessions and sing-alongs. People and music fed her, energized her, and filled her life with joy.

In the early 1960s Grace became involved with the struggle for civil rights, Vietnam War protests, and the peace movement both locally and nationally. Her activism continued for the rest of her days. She participated in the final leg of the 1965 voting rights march from Selma to Montgomery, AL. Very simply, she said, "It changed my life."

As she aged and became less mobile, she held court in her kitchen at what she referred to as her "command center." There she socialized with her friends, followed the news, hosted her women's group, played music with her recorder trio, and played competitive gin rummy games with anyone who wandered in. She became a fervent Red Sox fan ("I can't believe I even read the sports pages!") and would often share games with daughter-in-law Kathy who would be watching from Nebraska at the same time.

In 2015 she began working on her memoir which was published in May 2017, to wide acclaim. There is a quote at the beginning of her book by Albert Schweitzer: "The purpose of a human life is to serve, and to show compassion and the will to help others."

We celebrate a special life lived fully right to the very last hours.