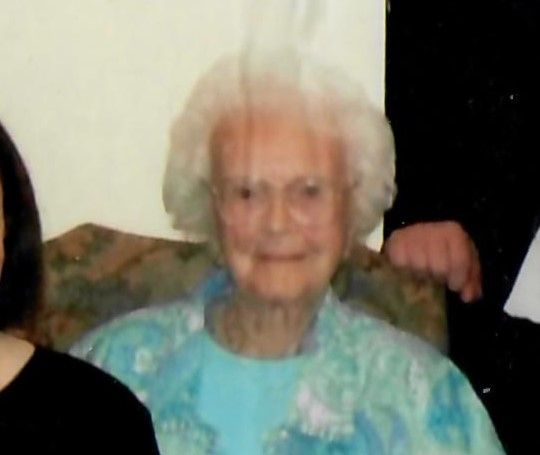 A fearless force of nature who bounced gleefully through every single one of her 109 years, Helen McCarthy Sawyer, Groton's oldest and most storied citizen, died this past Sunday. Always engaged, active, and on the go, Helen's boundless energy touched many, and she will be sorely missed by those who had the good fortune to know this absolutely remarkable women.

Born and raised in Nashua by her loving parents Annie and Arthur Wilson, Helen's pioneering spirit reared itself early. In her day, the best education went to the boys. Though she aspired to more, Helen had to content herself with time spent at Plymouth Normal School, graduating after only three years when she was ready for a career in teaching. But, Helen made the most of the experience, following her passion for reading and history before eventually leaving for a teaching position in Epping, New Hampshire. From there it was on to Groton, where her forceful personality commanded the respect of her middle-school charges, but also endeared her to students as well, many of whom still look back fondly on time spent in her classroom.

Groton was more than a career. It was also where she met her first husband Daniel McCarthy. Daniel was the local postmaster, and the two shared an idyllic marriage in an idyllic small New England town, riding bikes on warm days and trudging through the snow together when the mercury dipped. Groton was also where the couple adopted their loving daughter Shelia, completing their family. Helen took a break from her career in order to devote more time to raising her daughter, returning to her calling as middle school teacher and reading specialist when Shelia graduated high school. Not surprisingly, Helen excelled in all aspects of her life, and being a wife and mother were no exception. She was an amazing cook who loved to make dinners and bake treats for others, and enjoyed time spent with her loving family, especially on summer trips to Cape Cod, where Helen would roam the beach endlessly and happily splash in the sea.

Although she was a devoted wife and mother, Helen was also a restless dynamo whose passions and intellect found vent in a number of interests and hobbies. Helen had always been a voracious reader, devouring books on every topic, from politics, to fiction, to autobiographies and graciously volunteered her time as library trustee. This love of reading led to her becoming an author herself. Helen was a noted local historian and a member of the historical society, producing work on the people and places of Groton. In addition to numerous newspaper articles, she also wrote several books, her first on the Massacre of the Longly Family in 1694, a tragedy in which three children were taken hostage and one of whom, Lydia, became the first nun born on this continent. Expectedly, Helen was also an avid traveler who made 15 trips to Europe. As fond as she was of travel, she was always delighted to return to Groton, and place a red pin on the map which recorded her worldwide travels. Over the years, the map became red with her excursions.

What was the secret to Helen's long and joyous life? Good genes certainly played a part. Shelia remembers her mother happily exclaiming once, "I don't believe I've ever had a headache in my life!" For those of us less fortunate, we can take solace in the fact that Helen left behind a few pointers on how to make it past the century mark. She credited much of her longevity to nightly walks around the block after dinner. And chocolate. She loved dessert, and would never pass up an opportunity to try a dish. Her adventurous spirit sometimes required Helen to break the rules as well. Helen loved salt, so much so that she always carried a salt shaker around in her walker following her move to Rivercourt, just in case a host wasn't liberal enough with the condiment. Ultimately, Helen gave herself over completely to life. Whether chasing down those two young men who grabbed her purse or researching Groton's past in the local library, Helen was always focused on the world around her. We would all do well, perhaps, to follow Helen's example.

Helen's was truly a life well-lived, and she was an inspiration to everyone who met her. The rest of us can only aspire to the positivity, fearlessness, and energy Helen McCarthy Sawyer, a devoted wife, loving mother, and a women fortunate enough to live her life to the fullest. Helen will remain on the minds and in the hearts of family, friends, and indeed all, who came across her in the many, many years blessed us with her presence.