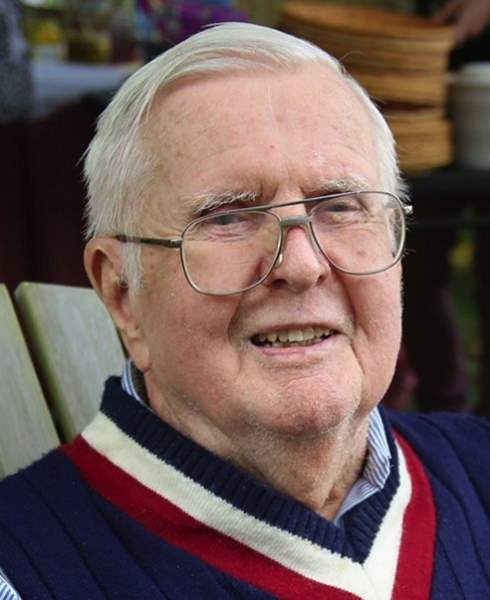 He was born in the Bromfield House in Harvard on March 3, 1919, the son of the Bromfield School principal James Albion Dunlap and Martha Soule Robinson.
Like many in the Maine-based Dunlap family before him, Jim attended Bates College in Lewiston. He graduated in 1940 and went to work at John Hancock Insurance Co. in Boston.

As World War II loomed, Jim enlisted in the army in 1942 and served as a mathematics instructor in officer training before being assigned to the 136th Anti Aircraft Artillery Gun Battalion. Stationed in Belgium during the Battle of the Bulge, his unit destroyed the aerial "buzz" bombs that were targeting the crucial port city of Antwerp. Leaving the army as a Captain, he was honored at a 2011 ceremony in Harvard, where he was presented with medals that he earned during his four years of service.

Jim married Grace Fuller Dudley on March 10, 1944. Upon his release from service in 1945, he earned a Master's Degree in Mathematics from the University of Michigan and began a family and an actuarial career at Marsh & McLennan, and later its subsidiary William M. Mercer, eventually serving as a director until his retirement in 1985.

Within a year, he lost Grace to cancer. On June 27, 1987, he married Nancy (Royal) Donaldson, herself recently widowed, and enjoyed 25 years together until her death in 2012. During the final years of his life, Jim remained in his home, where he had the care of dedicated aides.

Jim was a loving husband and father. He had a great sense of humor and was always ready with a jingle or a limerick. He enjoyed his many friends in Harvard, loved playing tennis, and looked forward to regular vacations in Grenada and Bermuda. He had great respect for the cocktail hour. Caring for his property was a favorite chore, and tractor rides are remembered by many of the children in his life.
Jim served his town of Harvard as a member of the school committee and a longtime trustee of the Bromfield School Trust. In 2008, he made a gift of 40 acres of land to the Town of Harvard. Conservation restrictions on the two parcels—the Dunlap Land and the Fuller Dudley Woods—are maintained by the Harvard Conservation Trust.

On Friday, October 20, 2017, at 2:00, a brief veteran's ceremony at Harvard's Bellevue Cemetery will be followed by a celebration of Jim's life at the Unitarian church's Fellowship Building. All are welcome to join the family at these events.