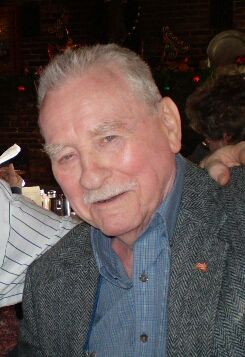 Jerome C. Callahan, Jr. age 92 and lifelong resident of Harvard passed away on Sunday, March 19, 2017 at Apple Valley Nursing Home in Ayer. He was the husband of the late Alice (Normandy) (Desmond) Callahan who died in 2003.

Jerome, known by most as "Jerry" was born in Harvard on September 2, 1924 the son of the late Jerome C. and Myra (Sheehan) Callahan. Raised and educated in Harvard, he graduated from Bromfield High School. He then enlisted in the United States Army and proudly served his country during WWII. He graduated from Boston College with a degree in Economics and soon married Alice and remained in Harvard where together they raised their loving family.

A dedicated entrepreneur, Jerry began a successful and rewarding career both in real estate development as well as owning and operating for many years the Cream Crest Store on route 2A in Ayer. Upon selling that business he worked for GV Moore Hardware in Littleton where he maintained many friendships over the years.

Jerry always enjoyed spending time with his family as well as gardening and maintaining his lawns and properties.

He is survived by his children Cynthia Ann Willoughby and her husband David of Morehead, KY, Jerome C. "Chris" Callahan, III of Derry, NH, Dennis J. Callahan and his wife Sandra of Wayland and Kevin M. Callahan and his wife Kellie of Noblesville, IN. He is also survived by his grandchildren, Sandra Barrett, Laura Willoughby, Kelly, Erin, Kirsten, Sean, Emily, Marlee and Jason Callahan, Shana Steckler, Billy Reber, April Wilson, Alex Packard, Phillip Pettigrew and several great-grandchildren. He was predeceased by his grandson Richard Willoughby and daughter-in-law Jenelle Callahan. He also leaves behind his close friend Mickey Oakes.

Family and friends will gather to honor and remember Jerome on Friday, March 24 from 4:00-7:00 pm in the Badger Funeral Home, 347 King St., Littleton. His funeral mass will be celebrated on Saturday at 10:00 am in St. Theresa, the Little Flower Church, 15 Still River Road, Harvard. Burial will follow with U.S. Army Military Honors at Bellevue Cemetery, Harvard.