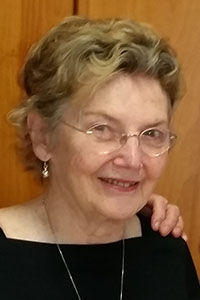 Joan L. Kelleher, 82, long-time resident of Harvard, MA, passed away on Tuesday, October 2, 2018 due to injuries sustained in a fall. Loving wife, mother, nana, sister, aunt, and friend, she leaves behind a legacy of love, laughter, and fierce loyalty to her family, Boston sports teams, and a properly sung National Anthem.

She met her husband of 55 years, Daniel F. Kelleher, at the Natick Labs where they worked and played bridge at lunchtime with their friends. The two built a rich life together, always focusing on the positives in life, especially having fun. Well into their late 70s, they skied at Mt. Wachusett, biked local rail trails, exercised at the gym, and ballroom danced at local senior centers, where they impressed with their considerable skills on the dance floor.

The couple raised two children, Mark D. Kelleher, who lives in Natick with his wife, Kim, and Kristen K. O'Reilly, who lives in Groton, MA, with her husband, Jim. Joan passed along to her children her positive attitude, as well as her love of reading and music. She gave them a healthy respect for the many things she worried about: fire, enclosed spaces, heights, unsafe driving, and lightning on the golf course, among others.

Joan graduated No. 1 in her Pawtucket (R.I.) High School graduating class and wrote the class poem. She went on to graduate from Wheaton College in Norton, MA, with a degree in economics. Professionally, she worked as a project manager for the Mechanical Engineering Division at Natick Labs. She later worked as a bookkeeper and office manager, using her love of numbers to keep several different small businesses running smoothly. She also worked in the human resources department at N.E.C. in Boxborough, and at Digital Equipment Corp. in Maynard, for many years.

One of Joan's most accomplished roles was one of supporter to her children and grandchildren. A frequent class trip chaperone, she was also in the audience for every musical, dramatic, and athletic performance of her children. She was a steady and supportive presence at her grandchildren's many dance and musical performances; recreational soccer, baseball, softball, and basketball games; and numerous awards and graduation nights. The pride she felt for her family was clear.

She laughed easily, and cried often, especially at patriotic songs or familiar and comforting church hymns. She had no use for ad-libbers who sang the National Anthem with indulgent runs. Although she was an accomplished piano player, she rarely played in front of other people. Her rich singing voice added joy to services at St. Mark's Episcopal Church in Westford where she was an usher and parishioner for the past several years.

Joan was an active member of the Harvard Women's Club and the Harvard Council on Aging. She also volunteered at the Loaves & Fishes food pantry in Devens and St. Paul's Soup Kitchen in Lowell.

Joan loved all Boston sports teams, especially the Celtics, Red Sox, and Patriots, but she also enjoyed cheering on minor league baseball teams like the Pawtucket Red Sox. Although she never won the Pegasus League fantasy football pool (second was her best finish), she studied hard for the draft each year and could discuss the ins and outs of setting up a weekly lineup with anyone.

In addition to her husband and children, she leaves five grandchildren, Maryelizabeth, Julianne, and Alex Kelleher, and Meghan and Patrick O'Reilly; a brother, Ronald Lees, and a sister-in-law, Susan Lees, both of Florida; two brothers-in-law, John Kelleher of Belmont and Neil Kelleher of Somerville; a sister-in-law, Mary Drew, of Somerville; several nieces and nephews; and many friends. She was predeceased by her brother David Lees, and parents, Bruckshaw and Irene Lees.

Family and friends can gather to honor and remember Joan for a period of visitation on Friday, October 5, 2018 from 4:00 PM until 7:00 PM in the Badger Funeral Home, 347 King Street, Littleton. Her funeral service will be held on Saturday, October 6, 2018 at 2:30 PM in St. Mark's Episcopal Church, 75 Cold Spring Road, Westford. Interment will be private.

In lieu of flowers, donations can be made to the Harvard Public Library Trust. http://www.harvardpubliclibrary.org/about/harvard-public-library-trust