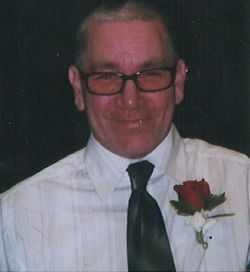 Joel R. Pierce 57, of Littleton and Townsend has left his earthly home and loved ones behind on October 23, 2015. He was born in Malden, MA on November 6, 1957 son of Stella (Garrett) Pierce of Littleton and the late Elmer R. Pierce. He grew up in Malden, Littleton and Lubec, Maine. He worked in construction for most of his life and later opened an ironwork shop. He loved making custom ironwork and fabrication, motorcycles and working on cars. Most of all, he loved caring for his granddaughter Kailey and helping out and spending time with his mother, Stella Pierce.

Joel was an organ donor and his legacy will live on through the donations he made to the New England Organ Bank.

In lieu of flowers, please send donations to Loaves and Fishes in Devens, MA or the COPD Foundation

Visiting Hours will be held on Wednesday Oct 28, 2015 from 4-8 pm at the Badger Funeral Home 347 King Street, Littleton, with a Memorial Service on Thursday at 10 a.m. Please see www.badgerfuneral.com