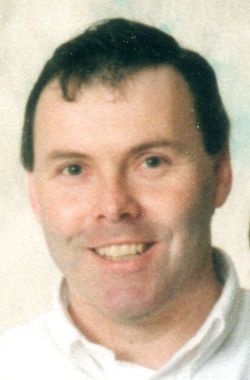 John, the son of Paul and Jean Fortier, was born in Berlin, NH and grew up in Sunapee NH. He graduated from Sunapee High School in 1975 and from UNH in 1979. While at UNH, he met Barb Zemlin and they began the world’s longest courtship…

After college graduation, John worked in Sunapee for a few years and then traveled with Barb throughout Europe before they settled down together in Acton and then Groton. John and Barb finally got married in 1994 and had three great children: Mike, Bridget, and Johnny.

John worked for many years at Epsilon in Burlington and at NEBS/Deluxe in Groton. John loved running, biking, skiing, reading, working around the house, and mowing the lawn. But mostly, he enjoyed his family life with Barb and the kids. His unique humor brought smiles to everyone who knew him.

He leaves his wife and children, his three sisters: Sandra Fortier of Sunapee, Christine Fortier of Dillon, CO, Carrie Humphrey of Sunapee, brother Timothy Fortier of Sarasota, FL, and Carrie’s husband Chris who was like a brother to him. Numerous in-laws, cousins, aunts and uncles, nieces and nephews, and neighbors and friends all loved him too.

Fortier of Groton June 21, 2016 John M. Fortier , Friends and relatives and  will be received by the family Friday   5-8 PM  at the Union Congregational 218 Main St. Groton, MA.  A Celebration of John’s life will be held 2 PM  on Saturday  June 25,2016 at the Church. In lieu of flowers memorial donations may be made to  Groton Conservation Trust  P.O. Box 395. Groton, MA 01450  www.gctrust.org. Arrangements by Badger Funeral Home Groton, MA www.badgerfuneral.com