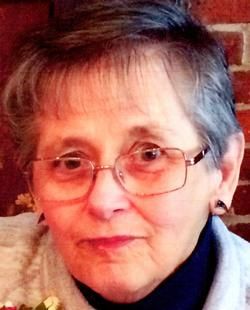 Judith A. Nolan, age 75, a longtime resident of Pepperell died December 15, 2015 at the Apple Valley Center in Ayer after a period of declining health surrounded by her loving family. She was the wife of James J. Nolan, Sr. with whom she shared 54 years of marriage.
She was born in East Boston, MA on February 1, 1940, the daughter of the late John H. Robinson, Sr. and Catherine A. (Driscoll) Robinson. She was educated in the Stoneham School System, graduating from Stoneham High School in 1958. Prior to her retirement in 2001, she was employed as a Telephone Sales Representative for New England Business Services for 24 years. While living in Pepperell for 44 years, she was active in the community, serving on the 4th of July Committee and the Pepperell Democratic Committee. She was an Election Worker at the Pepperell Polls and a Girl Scout Leader. Judy donated to many philanthropic interests. She was a former communicant of St. Joseph Church, serving on various committees and was a C.C.D. Teacher. She enjoyed music, animals, cooking and mostly her family.
Besides her husband of 54 years, she leaves a son, James J. Nolan, Jr. and wife Melissa of Ashby; two daughters, Tracy A. McEvoy and husband William of Leominster and Julie A. Holly and husband James of Winchendon; one brother, John H. Robinson, Jr. and wife Reda of Maryland; six loving grandchildren, James H. Nolan, Jarred Nolan, Melissa McEvoy, William H. McEvoy III, Taryn Holly and Ruben Holly and three great-grandsons.
Relatives and friends may call at the MARCHAND FUNERAL HOME, 16 Pleasant Street, Pepperell on Sunday from 4 to 8 p.m. A funeral mass will be celebrated on Monday, December 21, 2015 at 10 a.m. at Our Lady of Grace Parish, worshipping at St. Joseph Church, 28 Tarbell Street, Pepperell. Burial in St. Patrick Cemetery in Stoneham, MA.