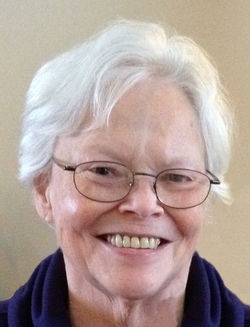 Kathleen “Kathy” (Dwyer) Marble, 75, of Harvard, MA, passed away peacefully at home on Thursday, April 14, 2016. Kathy was born March 30, 1941 in Wellsville, NY, to the late MaryAide (Mendonsa) and John Robert Dwyer. During her teen years, she was active in training and showing her Arabian stallion, bringing him with her to Massachusetts after completing college.

Kathy maintained a lifelong affection for her alma mater, Cornell University, where she majored in Mathematics and earned her AB and MAT. She worked at Massachusetts General Hospital as a computer programmer and systems analyst during the early days of computer medical applications. She designed and implemented a record keeping system for Shriners Burns Institute in Boston.

A resident of Harvard, MA for over 40 years, Kathy was passionate about the education of the town’s children. She served as Treasurer and President for the Village Nursery School and later spent eight years on various phases of the Harvard School Building Committee whose building was approved at the 1987 Town Meeting. Kathy was proud of that project and the fact that it was completed within budget.

In 1997 Kathy began her study of Ikebana (Japanese flower arranging) in the Ikenobo school. She became a serious and committed student and teacher of the art. She exhibited her work in the Boston Flower Show from 1999-2011 and participated in the 2001, 2005, and 2008 Ikenobo study tours in Kyoto. She served as Treasurer for the Ikenobo Ikebana Society of Boston and was gratified by her recent contributions to the Society’s new by-laws.

In Kathy’s own words, her greatest pleasures came from her family. She is survived by her loving husband of 42 years, Curt Marble; her son Leigh, his wife Elena, and their daughter Vivian, of Portland, OR; and her son David, his wife Jennifer, and their son, Rowan, of Lexington, MA.

In lieu of flowers, memorial contribution may be made in the memory of Kathy Marble to The Women’s Lunch Place, 67 Newbury Street, Boston, MA 02116 (http://womenslunchplace.org/).