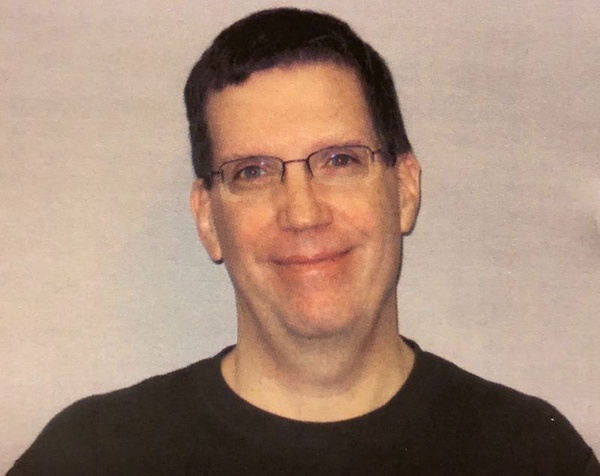 Kevin Armand Dudevoir, age 58 and a resident of Groton, passed away on the afternoon of Monday, September 17, 2018 at Massachusetts General Hospital, while surrounded by his loving family. He was the husband of Mari Paz Miralles of Groton.

Kevin was born on June 14, 1960 in Burlington, VT and was the son of Wilfrid G. and Margaret A. Dudevoir (Lucey) of Rochester, MA. Kevin earned a Bachelor of Science degree in electrical engineering from Northeastern University and he proudly served in the United State Air Force. He had previously lived in Hanover, NH and Nashua, NH, two places that he shared many cherished memories of with friends and family. He was employed as an electrical engineer with MIT Haystack Observatory in Westford, MA.

Kevin loved spending time with his family especially watching his daughter swim competitively. He was also an avid reader of a wide variety of topics, everything from anatomy to geology to history. Kevin enjoyed Boston sports, cheering on his favorite local teams: the New England Patriots, Boston Bruins, Boston Celtics and Boston Red Sox. He was passionate about his work and this was exemplified by the hours and dedication Kevin put forth every day, with every project.

In addition to his wife Mari Paz and his parents, Kevin also leaves behind his pride and joy, his beautiful daughter Ro Dudevoir of Groton. Mr. Dudevoir is also survived by his brothers, Glen Dudevoir of Colorado Springs, Colorado, Douglas Dudevoir of Kailua, Hawaii and Scott Dudevoir of Flagstaff, Arizona, his sister, Julie Dudevoir-Badger of North Conway, New Hampshire, as well as several nieces and nephews. Kevin's impact and memory will be felt by all who were blessed to have known him.

Family and friends will gather to honor and remember Kevin on Saturday, September 22nd at the Badger Funeral Home at 45 School Street, Groton, MA. Visitation is from 2:00 to 4:00 pm. A service celebrating Kevin's Life will follow at 4:00 pm. Burial will be private.

Donations in his memory may be made to:
The National Park Foundation
1110 Vermont Ave, NW, Suite 200
Washington, DC 20005
or
American Cancer Society
30 Speen Street
Framingham, MA 01701