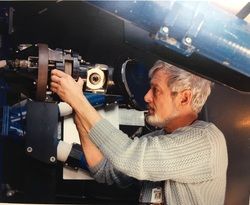 Lawrence "Larry" Weston Swezey passed away on October 18, 2016 at his home in Groton, Massachusetts.

Larry Swezey was born in Elmira, New York in the 1930's. He lost his father to illness at an early age and worked hard with his mother and two brothers to sustain the family.

He enlisted in the Air Force where he trained as an electronics technician. This training ultimately led him to join MIT Lincoln Lab where he built a fascinating career over the span of 40 years.

His time at MIT/Lincoln Lab began as a Technician, then Engineering Aide, Assistant Staff, Associate Staff and finally a full Staff Member. He initially worked out of Wallops Island in Maryland where he worked on rocket launches, then transferred to the Firepond Research Facility in Westford, MA, the location he ultimately managed. During his tenure he oversaw several strategic projects including the famous “Star Wars” or Strategic Defense Initiative. His work included assignments to Maui, New Mexico and California.

His interests were wide and varied. Blessed with a strong mechanical ability he not only built but even designed things including a fully hand built ice boat, a sailing kit for a canoe which he sold to Lincoln Canoes, full telescopes and even a few houses in the bargain. He used many of his inventions for epic camping trips in the wilds of New Hampshire and Maine. Larry also became a licensed airplane pilot flying extensively in New Mexico and Massachusetts, and took up scuba diving. Later on in life he became a dedicated amateur radio operator, operating with the Nashoba Valley Amateur Radio Club and coordinating a great many of their club competitions.

Volunteering was also a big part of his life. He used his technical skills to remake the town maps for emergency respondents in Groton, saving significant amounts of money and contributing enormously to the speed and efficiency of emergency response. He was regularly seen at public events such as foot races, including the Boston Marathon, where his radio skills helped ensure the safety of the competitors and spectators alike. And of course, a discussion of his life would not be complete without mentioning that he held the posts of Water Commissioner and Mosquito Inspector in Groton.

Larry always had a ready smile, a desire to help people, and a devotion par none to his grandchildren.

Larry is survived by his wife Cynthia Swezey, brothers Robert and Charles, and his sons Larry Jr (Lee) and Bill.

Arrangements under the care of Badger Funeral Home, 45 School St., Groton.  To share a memory or offer a condolence visit: www.badgerfuneral.com