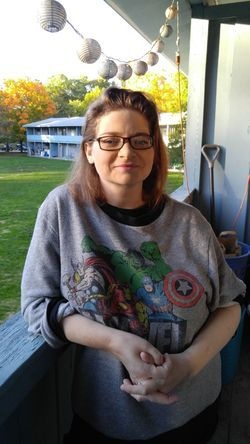 Lisa Jeanne Bracken, 40, of Acton, formerly of Littleton, died at her parent’s home in Littleton after a life-long battle with cancer.  She was born in Concord, MA on August 12, 1976, daughter of Raymond and Jeanne (Munn) Bracken.  She grew up in Littleton and was a graduate of Acton Boxborough Regional High School in 1994. She attended Lesley University in Cambridge for a year before her health forced her to drop out.

Lisa touched many families through her work at the Tiger’s Den afterschool program, where she worked for several years, as well as with Camp Tahattawan as a junior counselor. Subsequently she worked in an afterschool program in Acton as well. Working at Blockbuster in Westford fed her passion for movies, and she became the “resident expert” in film wherever she went. She and her family were also familiar to readers of the local newspapers through her mother’s weekly columns reporting their antics for many years.

For nearly 20 years she worked as a Senior Library Technician at the Lincoln Public Library, where the supportive staff and community carried her through several serious illnesses, two periods of dialysis, a kidney transplant, and a subsequent new cancer diagnosis. Lisa’s creativity shone through at a young age as she wrote poetry and developed her artistic talent, especially in mixed media with quirky and brilliantly colorful works. She loved horror movies, horror books, Monty Python, pop music, reading in general and Disney in particular, especially Alice in Wonderland. She had a wicked sense of humor and a passion for fairness and justice. She played a series of mean games on her ubiquitous cell phone.

Her survivors include her parents Raymond and Jeanne Bracken of Littleton and a sister, Mollie Bracken of Acton, and she is also survived by several beloved cats in Acton and Littleton. Other family members include aunts, uncles and cousins across the country and her dear friends Anissa Woodsum and Melissa Cunliffe-Nelson, both of New Hampshire.

Lisa was a long-time supporter of Plan International (www.planusa.org), an organization that helped children around the world; she was especially passionate about their work with girls and she would have appreciated memorial donations to them.

A memorial Survive will be held at the Littleton Congregational Church, 330 King Street, on Sunday November 20 at 3:00 pm. She was privately buried at Westlawn Cemetery in Littleton.