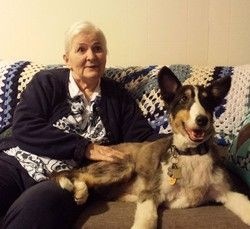 Marlene (Brennan) Byron age 81 of Groton, MA passed away on Sunday, December 25, 2016 at Life Care Center of Nashoba Valley in Littleton. She was the wife of the late Charles M. Byron, Jr.

Born in Worcester on June 7, 1935, she was the daughter of the late Earl Flagg Brennan and Verna Louise (Heath) Brennan.

Raised and educated in Holden, Marlene sang in the Worcester Chorus as part of the Messiah. She married Charles on April 15, 1961 in Concord, MA. They initially lived in Maynard and then spent some years in Concord and Littleton before settling in Groton. Marlene was a devoted wife and mother; she also worked as a Library Assistant for many years.

Marlene enjoyed boating and water-skiing on Lake Winnipesaukee in New Hampshire, participating in special events alongside her husband, who was a long time member of the Concord Minuteman, and caring for a variety of her grandchildren's pets.

Marlene is survived by her loving and devoted daughter Charlene Legge and her husband, Stephen of Groton, her sister, Jacqueline (Brennan) Woodward of Holden, her grandchildren, Paul Kelly and his wife Adriana of Oviedo FL, Meghan Lackey and her husband Matthew of Mayfield KY, Jocelyn Byron-Kelly of Winter Springs FL, and Russell Byron-Kelly of Groton, and recent great-grandson Charles Cole Kelly. She is also survived by her cousin Linda Heath, her brother-in-law George Byron, and seven nieces and nephews.

A memorial service will be held on January 29th at 2:00 PM at the Union Congregational Church, 218 Main Street, Groton, MA.

In lieu of flowers, donations in her memory may be made to the Union Congregational Church's Memorial Fund, 218 Main Street, Groton, MA 01450 (please note for Marlene Byron.)