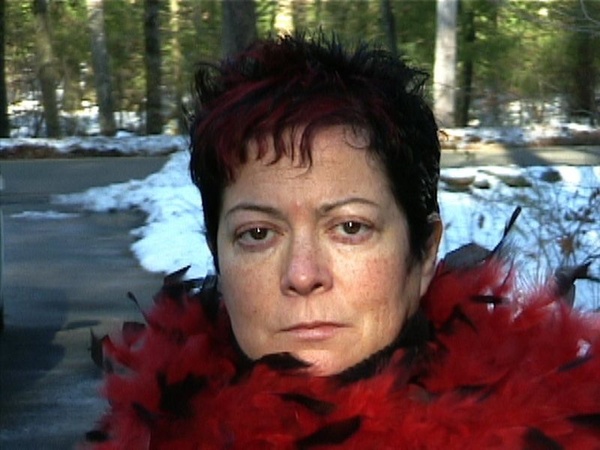 Mary-Ann Greanier was a gifted and generous person with a burning desire to make life better for people around her. She left this world suddenly on December 29, 2020 at her home in Littleton, MA.

She was born to Richard and Aurea (Augusto) Greanier in Northampton, MA on April 25, 1956 and lived her early years in Pelham, MA, where she attended first grade in a two-room school house. After graduation from Gardner High School in 1974, she attended Worcester State College in the Speech and Hearing program.

A prodigious reader with amazing recall, she was a playwright, poet, dramaturg, producer, catalyst, and political activist. Other interests included cooking, making herbal remedies, gardening, genealogy, local mushrooms, wildlife, and welding. She served as a paralegal for the New York Civil Liberties Union, the audio-visual director for a high school in Briarcliff, NY, and worked as a researcher for an educational non-profit in Cambridge, MA before turning her talents to the arts.

She was co-founder and co-producer of the Boston Instant Fringe Festival in 2001, producer for the Bruce Odland and Sam Auinger Requiem for Fossil Fuels, and assisted with many O+A projects including Harmony in the Age of Noise, at Tufts (2008), Hearing Space (2013), Seven Bells for Stone Barns( 2014), and Sounds from the Vaults, at the Field Museum in Chicago.

Mary-Ann joined Cornerstone Theater Company as a guest lighting designer for Tartoof, or an Impostor in Norcatur--and at Christmas! in 1987. She became a company member, and was lighting designer for their productions of The House on Walker River, Romeo and Juliet, Three Sisters from West Virginia, Pier Gynt, The Video Store Owner's Significant Other, and The Winter's Tale: An Interstate Adventure. She was a driving force behind the company's decision to move to a consensus-based governance model, which it has since followed. She was a major contributor and dramaturg to the company's group-written, community-specific adaptations of classic plays.

She wrote the libretto for Saga, a commissioned opera about the 19th century mass emigration from Norway to the US, and for both parts of David Reiffel's Maske Family Musical, a musical theater adaptation of a work by Carl Sternheim. Mary-Ann also wrote a commissioned adaptation of Louisa May Alcott's story, The Abbott.

She provided dramaturgy for projects and plays by John Hadden, Deborah Henson-Conant, David Reiffel, Keith Antar Mason, and Bruce Odland, among others. Her plays and adaptations have appeared at the Edward Albee Play Lab at the Last Frontier Theater Festival in Anchorage, Alaska (Child's Play), Boston Instant Fringe Festival (Relics), Boston Playwright's Theater, The Theater Company at Hubbard Hall, and in site-specific venues around the country. Recent writing projects include an opera libretto about Diego Rivera's mural at Rockefeller Center (also with Odland); and the screenplay Raising the Turf, co-written with Mike Croghan, about living in Ireland after the death of The Celtic Tiger. She was looking forward to developing a gender-bending Dueling Strindberg — her adaptation of two Strindberg one-acts — with composer and sound designer David Reiffel.

Mary-Ann was dramaturg for more than a dozen productions and lighting designer for nearly twenty more. She was technical director, design consultant, and set builder for ten shows and was production coordinator for John Hadden's Escher's Puddle. She served as development director and dramaturg for the Hittite Empire (a Black men's theater collective) 1995 - 1999. At the time of her death, she was dramaturg for the King Fool theater company, who are developing an adaptation of Shakespeare's King Lear.

She produced Wallace Shawn's Grasses of a Thousand Colors, directed by André Gregory at REDCAT in Los Angeles. At the time that Covid shut down the theaters, she was working as production coordinator to bring another Shawn/Gregory play to the Boston stage.

She was a co-founder, development director, and later executive director for The Tank Center for Sonic Arts - a unique performance and educational space in Rangely, CO. She also acted as Secretary for the Littleton, MA Cultural Council.

Mary-Ann was a guardian angel for many artists. Her belief in artists made art possible, and when they found themselves in trouble, with projects sinking, she showed up, patched the broken hulls, bailed the boats, and gave them the needed push back out to sea. She was a powerful encouraging force, a warrior who defended the right to create, and spoke with her selfless actions of the necessity of making art.

In addition to theater, Mary-Ann had a life-long passion for politics, and ensuring that every American had the opportunity to vote. She was a current member of the Littleton Town Democratic Committee, former Chair of the Plainville Democratic Town Committee, and had been a delegate to numerous state conventions. She organized, promoted, and attended countless rallies and marches. She worked on a number of campaigns over the past fifty years and was currently a member of the Georgia legal team fighting to prevent voter suppression. In 2009, she danced at President Obama's first inaugural ball.

She leaves behind Wayne Bryant, her life partner of 47 years, sister Susan O'Coin, brother Richard (pre-deceased), half-brother John Fournier, and half-sister Donna Schneider. She also leaves nieces April, Karin, Bailey, Holly, Kristin, Bridget, and Andrea, nephew Jonathan, grand-niece Adalyn, and cats Minerva and Emmy. Donations may be made to the Boston Animal Rescue League to help pets who have lost their forever home due to Covid.