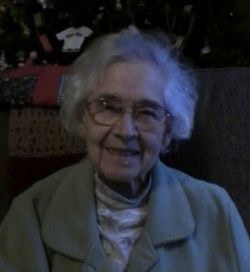 Mary Eleanor (Gilbert) Larson age 88 of Boxborough passed away on Monday, January 2, 2017 at her residence. She was the wife of the late Donald H. Larson.

Born in Concord on July 4, 1928 she was the daughter of the late Clarence E. and Mildred (Wetherbee) Gilbert. Mary was raised and educated in Boxborough where she attended all four of the original Boxborough school houses. After graduating from Acton High School she attended Burdett College as an accounting major.

Mary and Donald married on June 29, 1947 and remained in Boxborough where together they raised their loving children. Mary was a devoted Brownie and Girl Scout leader for 10 years selling not only Girl Scout cookies but also peanuts.

Mary was a long time and faithful member of the Boxborough United Congregational Church. She volunteered a Sunday school teacher, a member of the Ladies Alliance, and committed Fair Chairman and worker. She also served as Trustee.

Mary began working as a cafeteria worker at the Blanchard school for three years. Mary served as Town Clerk for five years before being appointed as the Town Accountant where she remained for seven years. She held these position for a short time from her home where she welcomed many residents to renew dog, hunting and marriage licenses as well as paying tax bills.

Mary and her sister Ruth donated the flag pole located on the hill at the intersection of Middle and Hill Road.

Family and friends will gather for calling hours on Friday, Jan. 6 from 3:00-6:00 pm in the Badger Funeral Home, 347 King Street, Littleton. Her funeral service will be on Saturday, Jan. 7 at 11:00 am in the United Church of Christ, 723 Massachusetts Ave. Boxborough. Burial will follow at South Cemetery, Boxborough.

In lieu of flowers, donations in her memory may be made to the Boxborough Historical Society or the United Church of Christ Boxborough.