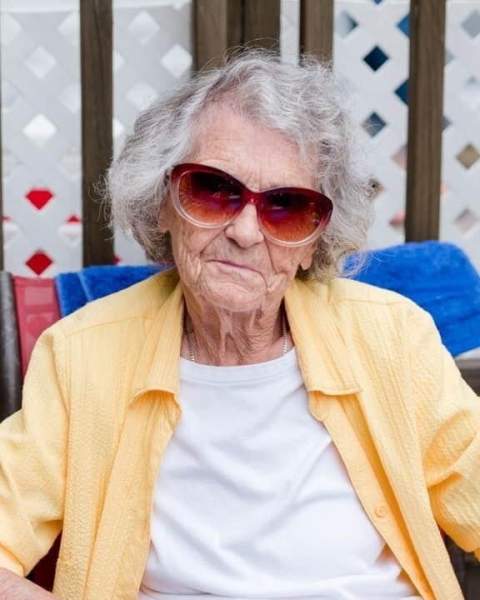 The family is saddened to announce the passing of Mildred Adams “Millie” McGovern of Littleton, MA at the age of 94.

A lifelong resident of Littleton, Millie was born on September 25, 1928, in the home of her beloved parents Harold and Josephine (Ruggles) Whitcomb.  She spent her early years attending local schools and helping with chores at the family-owned Springdale Farm.  She often spoke of growing up on the farm working alongside her brothers.  They would remain close through their adult years as they all stayed in Littleton.  After finishing high school, she continued her education, graduating with a degree from Becker College. Millie then went to work as a clerk for a local insurance agency, and it was during this time she met and later married Hugh McGovern.  Together they raised five children in the home they purchased on New Estate Road.  She would remain in the home she loved for nearly sixty years.

Millie stayed at home to care for her children while Hughie ran the family-owned welding shop just up the street.  She loved all her children equally but differently, bringing out the strengths in each of them.  She was proud of all of them as she watched them succeed in anything they set out to do.  Millie was a very thrifty and talented woman, sewing many of her children’s clothes and cooking delicious meals from scratch.  She made the best gravies, with turkey being the favorite.  During these years she was a Girl Scout leader and one of the two founding members of the Littleton Tigers Booster Club raising monies to support the high school’s sports programs. She later volunteered to sell tickets at the games and was selling them as recent as last Sunday. She always shared her beautiful smile followed by a sweet-hearted “How are you kid”.  It was volunteering that would carry her through the years after Hugh passed away.

Millie worked as a police officer and later as a school crossing guard.  She would hold this position until her passing.  Millie knew every kid in town and was quick to rattle off words of encouragement to brighten their day.  When she wasn’t minding the crosswalks or volunteering for some school activity, you could find her at any number of the town’s committees and organizations.  She served on the Housing Authority, Cable Commission and as Election Warden.  She was a member of the Garden Club, Rotary Club, delivered Meals on Wheels and was the Grand Marshal for Littleton’s Tercentennial Parade.

Millie was an avid gardener growing vegetables in the early years before focusing on flowers. You could always find her tending to her many gardens around the house and barn.  She particularly loved growing Morning Glories that would some years cover the entire end of the barn.  She enjoyed watching the birds, especially cardinals, and sitting at Long Lake not far from the family homestead.

Her first grandchild nicknamed her “Nanny”, a name that followed her for two more generations.  She loved hearing her grand and great grandkids call out her name as much as they adored her.

Family and friends will gather to honor and remember Millie for a period of visitation on Sunday, November 13, 2022, from 2:00 PM until 6:00 PM at the Badger Funeral Home, 347 King Street, Littleton, MA. Millie's graveside service will be on Monday, November 14, 2022, at 11:00 AM at Westlawn Cemetery, 7 New Estate Road, Littleton.

In lieu of flowers, please consider a donation to the neighborhood suppers, put on by the Littleton Congregational Church, 330 King Street, every Tuesday.