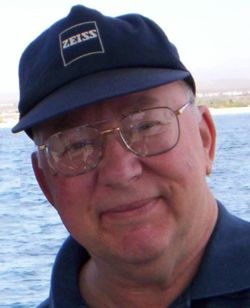 Orlo Stephen Thompson, age 76, of Groton, MA passed away peacefully on October 4, 2016 at Nashoba Valley Medical Center with his loving family by his side.  He was the beloved husband of 55 years to Barbara Kay (Cullen) Thompson.

Born in Boston, MA on August 15, 1940, he was the son of the late Orlo Lewis Thompson and Zilpha (Bellinger) Thompson. Raised and educated in Dalton, MA, Orlo graduated from Dalton High School in 1958. He and Barbara married on October 14, 1961, and settled in Groton shortly after where together they raised their loving family.

Orlo worked at the M.I.T. Lincoln Labs at the radar site where they mapped the moon for Nassau Astronauts.  He managed a team of service technicians at the Boston Office of California Computer Products.  Before retirement he worked as a Field Technician for Zeiss Medical Equipment repairing Ophthalmic Medical Equipment and set up many trade shows.

Orlo was an active member of the Cast Iron Seat Collectors Association and collected cast-iron seats from farm implements.  During his spare time he loved blasting off the rust and hand painting them to their original beauty.  Orlo traveled to conventions across the US and Canada, where he could visit with other collectors from around the world.  He liked exploring flea markets and auctions in search of new seats to add to his collection.

Orlo and Barbara had three girls and enjoyed many years of gardening, camping, canoeing and frequent vacations together.  They spent many family summer vacations in Boothbay Harbor, ME where he loved to go fishing and watch the boats pass by.  Orlo loved exploring new places and the world in which he lived.  He and Barbara took many cruises, they walked on a glacier in the Canadian Rockies, Glacier National Park and searched for alligators in the Florida Everglades National Park by airboat.  You could always find Orlo outdoors on a sunny day.

Orlo valued his family above anything else.  He particularly loved that they would all gather around him every Sunday afternoon and share special moments and stories of what was happening in their lives.  He will be missed dearly by his beloved wife Barbara and their daughters Debra Thompson of Groton, MA and her significant other Thomas Maylin, Shauna Roberts and her husband Dana of Townsend, MA, and Stephanie Seeley and her husband Wayne of Clarksville, TN. He is also survived by his brother Jeffrey Thompson of Pittsfield, MA and his sister Zilpha Murray of Springfield, MA.  He also leaves his grandchildren Marcus Seeley, Sydney Roberts, and his great grandson Bentley Seeley.   He was uncle to many and a friend to all.

Family and friends will gather to honor and remember Orlo on Tuesday October 11, from 6 to 8 PM at Badger Funeral Home, 45 School Street, Groton, MA. His funeral service will be held on Wednesday at 11 AM in the funeral home.  Burial services to follow at the Groton Cemetery.