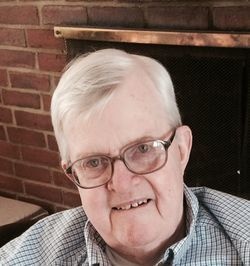 Peter Wilson Tierney, 80, of Littleton, MA, died unexpectedly on December 24, 2015. He was born in Salem, MA on April 28, 1935. Son of the late Francis Peter Tierney and Pauline Wilson Tierney, he grew up in Salem and went on to attend UMASS Amherst earning a degree in Science with a major in Geology, and later earned a Master in Education. He was an active member of Phi Sig Alpha with which he has been active for the past sixty years. He was married to the late Nancy (Green) Tierney for 56 years. They lived in North Hampton, MA until 1961 when they settled in Littleton, MA and raised their family while Pete worked as a beloved science teacher at Littleton High School. He enjoyed a long career as an esteemed educator and will long be remembered for his passion for earth science, his dry sense of humor, and his dedication to his profession. Pete was active in the community, including many years as a CCD teacher and a Boy Scout leader, keeping the boys active camping, but making sure their homework was also done. Hardly a day has gone by in the past 60 years when he has not called a child or friend to inform them of a dynamic science program on television, an upcoming celestial event, a geological wonder, or his opinion on the politics of the times. He will also be remembered for his love of reading, history, and the French language, spending much time at the Littleton Library. Pete loved his work with the Littleton Conservation Commission and there is a town trail named after him. He kept working part time at Hewlett Packard until just a couple of years ago. He believed whole heartedly in enjoying retirement and loved to travel.

There is a 10 AM Mass of Christian Burial at St. Anne’s Church, 75 King Street, Littleton, MA on Monday January 4, 2016. Visiting Hours will be Sunday, January 3, 2016, from 2-7 PM at the Badger Funeral Home in Littleton, MA. A private burial will be at Beech Grove Cemetery, Rockport, MA. Please see www.badgerfuneral.com. Donations may be made in Peter’s name to the Littleton Conservation Trust PO Box 594 Littleton, MA 01460 http://littletonconservationtrust.org/donate/#memorial-gift or The Littleton Education Fund PO Box 501 Littleton, MA 01460 littletonedfund@yahoo.com.