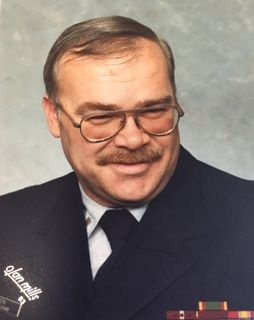 Raymond Ronald (Ray) Bracken of Littleton, age 75, died on Wednesday August 9, 2017, at Emerson Hospital, surrounded by family and friends. Born in Hay Springs, Nebraska, on April 26, 1942, Ray was the adopted son of the late Donald and Dorothea (Rutkowski) Bracken. Raised in Denver, Colorado, he was a graduate of Lutheran High in that city and studied at Concordia College in Austin, Texas.

Ray was a veteran of the US sea services. He was on the US Navy aircraft carrier Kitty Hawk during the Vietnam conflict and later served 16 years with the US Coast Guard, based in Boston and other New England locations. He was especially pleased with his term on the icebreaker Eastwind; that vessel often broke up ice pack to allow other ships to reach Antarctic ports. Ray retired from the military in 1983. He subsequently worked at Donelan's and Archer's Mobil, both in Littleton.

When he was stationed in Boston he met Jeanne Munn and they married in 1970. They moved to Goldsmith Street in 1972 and lived there for 43 years, raising daughters Mollie Howland Bracken and the late Lisa Jeanne Bracken, who died last November. The household sometimes resembled a zoo with a number of cats, dogs, fish, birds, hamsters and rabbits in residence at different times. His favorite cats were Mongo, a gray tabby, and Avery, a pedigreed Bengal; the latter survives.

In midlife Ray was contacted by his family of origin and he met his natural siblings: brothers Merle Hindman of Nebraska, Jerry Heard of North Dakota, and his sister Ermyle Cornett of Magnolia, Texas. His brothers predeceased him but his sister survives as well as many Cornett offspring in several generations and his nephew Gary Heard of Montana. His adoptive brother Ronald Bracken of Boise, Idaho, also predeceased him; Ronald's daughter Rose Bracken Burbidge, also of Idaho, and her children survive.

Ray was a long-time member of the Congregational Church of Littleton, singing in the choir for years and also taking part in the educational program at the church. He was fascinated by history, especially World War II, and read many books about ancient aliens (aka UFOs). Twenty years of his life were lived on the pages of the Littleton Independent and its sister publications through his wife Jeanne's columns "The Brighter Side" and "Ramblings."

Ray loved RVs and owned several over time, taking the family camping from Maine to Maryland and once across country to Denver in a small pickup camper. He enjoyed swing music and anything by Mel Tormé, and he was a Red Sox fan from afar, preferring his comfortable recliner for watching games to the uncomfortable seats at Fenway.

A memorial service is planned for this fall; internment of his ashes will take place privately at Westlawn Cemetery in Littleton, where he will share his daughter Lisa's final resting place.