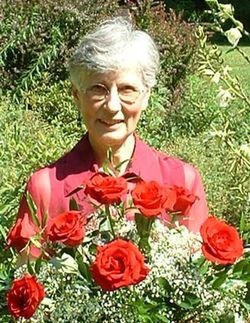 Rita M. Lancaster, of Harvard MA, died at age 70 at the Apple Valley nursing home in Ayer after a long battle with Alzheimer's disease. Rita was the daughter of Daniel Lancaster of Andover, MA who was born in Preston, England. in 1907 and Rita Bell who was born in Lawrence, MA in 1906 and who was also residing in Andover MA at the time. Rita and her husband, Joseph Dzekevich of thirty seven years, moved to Harvard just after the blizzard of 1978. Rita was a graduate of St Patrick's High School in Lawrence, MA, class of 1963, and then earned a B.S. in Mathematics with a minor in Education in 1967 from Merrimack College in N. Andover, MA.

After college, Rita hired into The Digital Equipment Corporation in1967 where she wrote PDP8 computer programs for numerical control of industrial milling machines, visited installations, demonstrated the software at trade shows and trained sales people. Rita was Digital's first woman programmer. She went on to be a software specialist at Digital's Cambridge MA sales office, a Sr. Marketing Specialist for Digital's Marlborough MA based Computer Aided Design (CAD) products, a Corporate Promotions Manager where she announced Digital's VAX computer line and finally did technical writing and course development.

Rita was a member of the Harvard Unitarian Universalist Church where she enjoyed music and was a soprano in the church choir and sang in a local church based folk music group called The Lost Chords. She also loved the outdoors, liked walking, and enjoyed past summer homes in Bar Harbor Maine and N. Woodstock New Hampshire. For many years Rita was a member of Pets and People, where she visited and brought joy to the Alzheimer's and Dementia residents with her dogs Chelsea and later Pepper to various nursing homes in Concord, MA.

Rita is survived by her husband Joseph Dzekevich of Harvard, MA; her sister and brother-in-law Anne and David DeNuccio of Farmington CT; her sister Jane Carrigg of Lexington MA and by her brother and sister-in-law Jim and Jackie Lancaster of East Wakefield NH along with many nieces and nephews.

The will be a memorial service for Rita on Sunday, November 01, 2015 at 2 PM at the Harvard Unitarian Universalist Church on the common, Harvard MA, followed by a reception in the church fellowship building next door.

For those wishing to make a donation in Rita's name, the family suggests the Alzheimer's Association, 480 Pleasant Street, Watertown, MA 02472 to support research in eventually stopping this disease and helping current people with the disease.