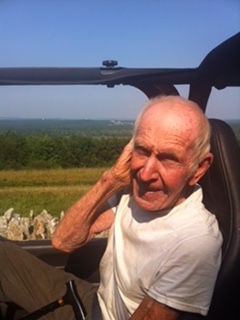 Robert Hamilton Simmons age 87 of Littleton formerly of Brighton passed away on Thursday, September 7, 2017 at his residence.

Born in Somerville on August 31, 1930 he was the only son of Allan S. and Louise Hamilton. He was raised and educated in Boston. Throughout his early years he would travel from Boston to the family camp in Littleton, a place he came to love and later move to.

Robert lived for many years in Brighton where he worked as an automobile mechanic and raised his family. He always took pride in his work and could repair anything. When he moved to Littleton in 1982 he soon became acquainted with many local residents. He also enjoyed fishing, bowling, taking cars apart, and meeting new acquaintances.

Family and friends will gather to honor and remember Robert on Monday, Sept. 11 from 11:00-12:30 pm in the Badger Funeral Home, 347 King St., Littleton. His funeral service will follow at 12:30 pm. Burial in Westlawn Cemetery, Littleton.

In lieu of flowers or Donations please share some time with an elderly family member, an elderly neighbor, or someone in need of companionship.