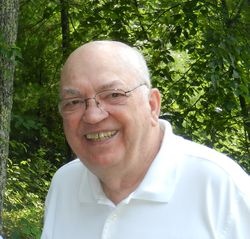 Russell E. Jack, 82, of Littleton, MA, formerly of Hamden, CT, passed away on Tuesday, January 3, 2017. He was the devoted husband of Frances (Flood) Jack.

Born in Topsham, Maine he was the son of the late Wallace A. and Lillian (Howland) Jack. Raised in Kennebunk Beach, he graduated Valedictorian from Cornish High School in 1953. His family owned and operated the Wentworth House summer hotel (Kennebunk Beach) and the New Lincoln Hotel (Cornish) where Russell worked as a young man. Russell earned his B.S. in Education from Univ. of Maine as well advanced degrees from Univ. of CT and Ohio State Univ. Following their marriage at St. Rita's Church in Hamden in 1962, Russell and Frances lived in Germany and Spain where he taught high school mathematics on US Military bases. Later, they made their home in Hamden where together they raised their children and he continued to teach at Amity Regional High School in Woodbridge, CT. Following his retirement, he worked at Centerville Lumber and as a locksmith in Hamden for a number of years before moving to Littleton in 2012 to be near family.

Russell was well known for his astute scientific and mathematical mind as well as his love of sailing, traveling, astronomy, UCONN basketball, and clever puzzles; but he will ultimately be remembered most as a devoted husband and father. He was a selfless, hardworking man who was kind-hearted, lived optimistically, and was always quick to help those in need. As an educator at heart, he had a curious mind, and loved to share his vast knowledge with those surrounding him. He enjoyed taking on and completing challenging projects, from home design and remodeling to building kayaks. He led by example- the value of hard work and honesty came just from watching him.

Along with his wife, he is survived by his 4 children Gregory P. Jack and his wife Amanda of Indianapolis, IN; Robert A. Jack and his wife Wonyoung Cha of Brooklyn, NY; Christine E. Oborski and her husband Justin of Littleton, MA; and Aaron T. Jack and his wife Jessica of New Hartford, CT; and his sister Marjorie and her husband Stanley Boynton of Somerset, MA. He is also survived by his grandchildren Augustus, Evelyn, and Vivian Jack; Kasper Jack; Laci and Cheyenne Oborski; and Kaylee, Emmalynn and Noah Jack. He was predeceased by his siblings Arthur Jack, Virginia Maki, Donald Jack, Barbara McLaughlin, and Carlton Jack.

Family and friends will gather for calling hours on Saturday, January 14 from 9:30-10:30 AM in the Badger Funeral Home, 347 King St., Littleton. His funeral service will follow at 11:00 AM at St. Anne Parish, 75 King St., Littleton. A private burial will be held at Hope Cemetery in Kennebunk, ME.

Memorial contributions may be made to the Massachusetts General Hospital Cancer Center.