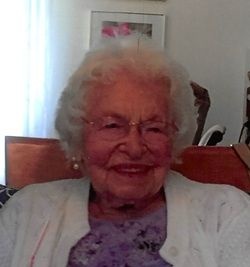 Ruth Emma (Clark) Wilson age 102 of Groton passed away Tuesday, January 10, 2017 at Life Care Center of Nashoba Valley. She was the wife of the late Frank James Wilson.

Born in Carlisle, Ma on May 19, 1914 she was the daughter of the late Romey Lyle and Rose May (Fadden) Clark. Ruth attended Carlisle Elementary Schools and her family moved to South Chelmsford where she graduated from Chelmsford High School. She then attended the Tewksbury State Hospital School of Nursing and after graduation, she worked as a Private Duty Nurse and worked as a Nurse at Emerson Hospital.

Ruth met and married Frank J. Wilson in 1940 and settled in South Acton where they raised their family.

Frank passed away in 1964 and Ruth returned to Nursing at Emerson Hospital until her retirement in 1979. Ruth was proud of her family and her achievements which included driving safely until she gave up driving at age 94.

Services will be Saturday at 2:00p.m. in the Badger Funeral Home, 45 School St., Groton followed by interment in the family lot at Woodlawn Cemetery, Acton.

Visiting hours are Friday at the funeral home from 3 to 6 p.m.