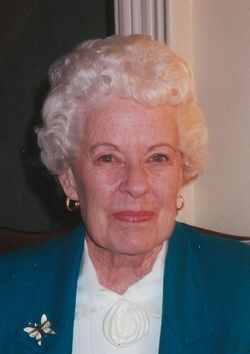 Ruth A. Young, 89 of Bedford, NH passed on May 12, 2016. She was born in Ayer, MA at Memorial Hospital on February 16, 1927, the second daughter of the late William H. and Ruth J. Ewing. She grew up in Littleton, MA, graduated from Littleton High School, Class of 1945. In her teen years with her love of animals, Ruth became involved in the 4-H Dairy Club. She travelled to agricultural fairs throughout the state including the Eastern States Exposition.

After graduating from Littleton High School in 1945, Ruth enrolled in Katherine Gibbs Secretarial School, graduating in 1947; becoming employed by Schudder, Stevens and Clark Investment Counselors.  During this time Ruth met her husband Marlin of 63 years while he was on leave from the Navy in Boston, MA.  Ruth and Marlin married on May 23, 1948, settled in Littleton, Massachusetts and raised their family.  Ruth was employed as the assessors' clerk, later ran for the position of assessor and became the first female assessor, 1957-1959 for the town of Littleton. In 1960 Ruth was employed by Cobb, Inc and retired in 1986 after being their International Export Manager. Cobb, Inc was later sold to Upjon, Inc. Arkansas

While living in Littleton, MA, Ruth was an active member in the Women's  Club.  Also a member of the Littleton Historical Society. Ruth was on the Banquet  Committee for Littleton's 250th celebration. Ruth and Marlin retired to Falmouth, MA to enjoy the several homes that they had built.  They enjoyed travelling throughout the United States and Europe.

Ruth has returned to her home at Badger Funeral Home, formerly the private residence of the Hartwell family, where as a young girl she lived with her parents and sisters Jackie and Lillian while waiting for their family home to be built on Foster Street.

There will be a memorial service on May 21, 2016 at Badger Funeral Home, 347 King Street, Littleton, MA at 11:00. A private interment will be at Westlawn Cemetery in Littleton, MA.

In lieu of flowers, donations may be made to the charity of your choice or The Littleton Historical Society, Littleton, MA.

"Always remember the beauty of the garden, for there is peace."