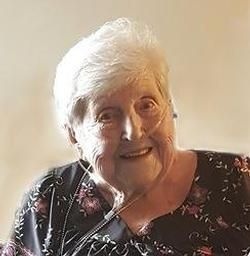 Sarah Alice (Gullette) Bosley, a longtime resident of Pepperell, died in Groton, November 30, 2016, after a period of declining health, her loving family at her side, aged 100 years. She was the beloved wife of the late Carl J. Bosley Sr., with whom she shared 26 years or marriage prior to his death in 1972.

Born at the family’s farm in Van Buren, Arkansas, October 18, 1916, a daughter of the late Charles R. Sr. and Carrie (Hackler) Gullette. She received her early education in the Van Buren school system, and was a graduate of Van Buren High School with the Class of 1932. Sarah continued her education at the Cincinnati Business School, Ohio.

Sarah enlisted in the U. S. Army on March 16, 1943, attaining the Rank of Staff Sergeant. She received the Women's Army Corps Service Medal, Good Conduct Medal, World War II Victory Medal, and the American Campaign Medal, and was honorably discharged on March 22, 1946.

After WWII, Sarah met Carl and they married on February 12, 1946, settling in Pepperell to raise their family. Sarah became affiliated with Shattuck Oil in Pepperell as an Office Clerk, until she retired in 1978.

Sarah was an excellent cook, especially of fabulous southern dishes. She also enjoyed teaching people how to pickle and can fruits and vegetables. Over the years, she made hundreds of homemade jams and jellies for church fairs. A kind, generous person, she will always be remembered for her love of family, and devotion to country.

She is survived by a daughter, Suzanne Takvorian and her husband Kenneth of Lunenburg, a son, Carl J. Bosley Jr. and his wife Judith of Greenville, NH, a sister,Cynthia Ann Gattis of Van Buren, Arkansas, nine grandchildren, eleven great-grandchildren; numerous nieces, nephews, and cousins, and many dear friends. She was the mother of the late William Charles Bosley, and sister of the late Charles Richmond Gullette Jr. who was killed in action during WWII, and the late William Hackler Gullette Sr.

BOSLEY – In Groton, November 30, 2016. Sarah Alice (Gullette) Bosley, of Pepperell, aged 100 years. Beloved wife of the late Carl J. Bosley Sr. Relatives and friends may call at the Marchand Funeral Home, 16 Pleasant Street, Pepperell, on Sunday, December 4, from 1:00 to 5:00 p.m. Sarah’s Funeral Service will be held at the Community Church, Pepperell, on Monday, December 5, at 10:00 AM. Burial in Woodlawn Cemetery, Pepperell. In lieu of flowers, friends who wish may make donations in her memory to the Community Church, 3 Townsend St., Pepperell, MA 01463, or to Friends of Nashoba Nursing Service & Hospice, Two Shaker Rd., D-225, Shirley, MA 01464.