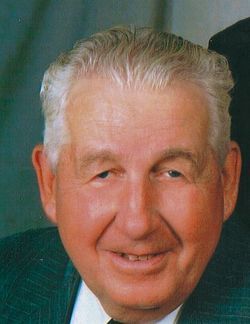 Stanley J. Kopec Sr. 90 of West Groton died at Nashoba Valley Medical Center on Jan 16, 2016 He was born in West Groton, MA on Feb 24, 1925, son of the late Frank and Frances (Zalesney) Kopec, and was the husband of the late Anna (Duda) Kopec who died in 2014.   He grew up in West Groton and was a graduate of Groton High School. He served in the U. S. Army during WW2,

A life long resident of West Groton, Stanley was married in 1951 and worked as a papermaker at The Groton Leatherboard for many years. He was a member of St. James Parish in West Groton and belonged to the Groton VFW. Stanley belonged to a bowling league when he was younger. He also loved to garden and spent every summer and fall in his garden growing vegetables.

He is survived by his children Stanley, Jr. and his wife Bobbye Kopec of Pepperell and Nancy Kopec of Windham, NH. and a sister Helen Rooks of Forge Village

Visiting hours will be held at Badger Funeral Home 45 School St. Groton on Wednesday from 4-7 pm.   A Mass of Christian Burial will be held at Our Lady of Grace Parish Worshipping at St. James Church, West Groton,, on Thursday January 21, 2016 at 10 am Burial at St. Mary’s Cemetery Ayer. In Lieu of Flowers contributions may be made in his memory to Patriot Paws (A group that trains service dogs for disabled Veterans) www.patriotpaws.org.   Please see www.badgerfuneral.com