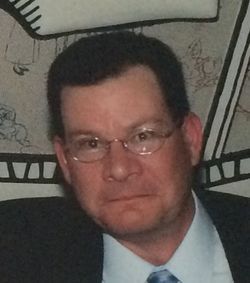 Steven Robert Cartwright, 49, of Littleton, died peacefully with his loving wife at his side on September 16, 2016. He was born in Minneapolis, Minnesota, on January 24, 1967 son of the late David and Barbara (Durum) Cartwright. He grew up in the Bahamas and moved to Marietta, Georgia, where he graduated High School. He then served in the US Navy from 1985 until 1989.

After meeting her in Bermuda in 1987, he was married in 1992 to Pamela (Melican) Cartwright (Medford High School, Class of 1981). They lived in Medford and North Reading before coming to Littleton in 2004.  Steve worked as a Fire Safety Technician for Fire Equipment, Inc. in Medford for the past 17 years.

He was an avid sports fan and loved the Red Sox, Patriots and Bruins and especially loved to watch his son, Matthew, play soccer and lacrosse. He enjoyed the beach and scuba diving and earned his Rescue Divers License. His favorite location to dive was the Eastern Caribbean Islands.  He also liked running, was a fan of all music including Led Zeppelin, 70’s and 80’s rock bands and, most recently Classical. His favorite weekend destinations throughout the year were Short Sands Beach and Nubble Lighthouse in York, Maine and Brewster in Cape Cod, MA.

In lieu of flowers, donations may be sent in Steven’s name to the website: