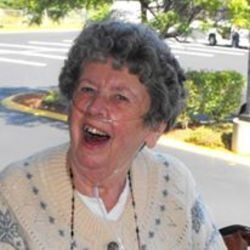 Susanne Ludwig passed away on January 9, 2017. She suffered from a chronic lung disease.
She was born in Stoneham, MA on September 19, 1934. She grew up in Woburn and graduated from St. Charles Borromeo High School, Class of 1952. She moved to Littleton in 1966 and then to Pepperell in 1984. Mrs. Ludwig, a communicant of Our Lady of Grace Parish St, Joseph's Church, served as a Eucharistic Minister, Lector, Acolyte, Member of the Bereavement Ministry, and Legion of Mary. Throughout her life, Mrs. Ludwig was active in Malcolm S. White PTA, Woburn: C.D. of A. Court Isabella No. 150, Woburn; and Littleton Grange. She was an avid knitter.
After twenty years, she retired from Lone Star San Vel Concrete Corporation in 1990 as a Personnel Supervisor.
She is pre-deceased by her husband, Harold J. Harris in 1979 and her husband Allan A. Ludwig in 2010.
Survivors include 2 daughters, 2 sons, a daughter-in-law, and a son-in-law; Anne-Louise Harris of Landfall Village, MN, Gary and Margaret (Peggy) Freeman of Gardner, Harold D. (David) Harris of Nashua, NH, and Michael & Lisa (Ducharme) Harris F. of Milford, NH. 1 grandchild, Megan P. Freeman of Gardner and 4 step-grandchildren; Wendy Knight, Stafford, VA, Holly Holloway, Fredericksburg, VA, Faith Reipold, Greenfield, MA, and Alan Freeman of Gardner and 7 step-great-grandchildren.

A visitation will take place Saturday Jan 14, 9 -10:30 AM at the Badger Funeral Home 45 School St. Groton, MA. Followed by a 11 AM Funeral Mass of Christian at Our Lady of Grace Parish worshipping at St. James Church 28 Tarbell St. Pepperell, Ma. Internment at Westlawn Cemetery, Littleton, MA In lieu of flowers, donations may be made to: The American Lung Association 5 Mountain Road Burlington, MA 01803.

Our Lady of Grace Catholic Parish