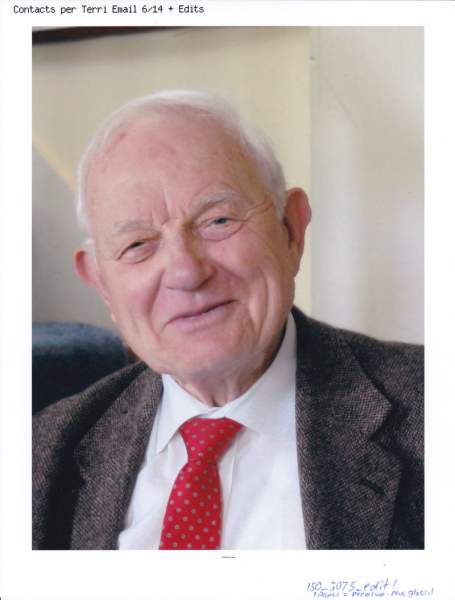 Thomas Seabury Crow died at his home in Groton, Massachusetts on July 7, 2017.

He was born May 6, 1920, oldest child and son of Glenn Frank Crow and Rachel Kensett Crow in Wooster, Ohio. At the age of one year he moved with his parents to Loudonville, Ohio, where he lived until he left to attend college. He graduated valedictorian in 1938 from the Loudonville High School after which he attended The College of Wooster where he graduated in 1942 with a Bachelor's degree in chemistry.

On January 7, 1942, he joined the Navy and was called to midshipmen's engineering school at Columbia University in November of that year. In 1943 he was assigned for one year as an Ensign in aerology training at the Naval Academy Post Graduate School in Annapolis, Maryland, after which he was reassigned to an Army Navy weather station on Espiritu Santo Island in the South Pacific. He later was assigned as the Aerologist to the aircraft carrier, USS Salamaua, CVE 96. He retired from the Navy as a full lieutenant in January, 1946.

Mr. Crow met his first wife, Eleanor Mary Fletcher, at Christmas time, 1943, while she was a new teacher at The George School in Newtown, Pennsylvania and he was still attending the Naval Post Graduate School. A little over a year later when he returned from the South Pacific, they were married in the Congregational Church in St. Joseph, Michigan, April 1, 1945. After the Navy Mr. Crow continued his studies at MIT and graduated in June 1947 with a Bachelor's degree in chemical engineering.

After June, 1947, they lived in Brookline, Mass. while he was employed by the Flexible Company as their northern New England representative. In 1948 the family moved to Groton permanently. Soon after moving to Groton, Mr. Crow joined the General Electric Company where he worked until 1965 in the Small Steam Turbine Department in Fitchburg, Mass. While at GE he became a licensed professional engineer in Massachusetts. He then worked until retirement for the Gustavo Preston Co., first in Boston, and later in Woburn, Mass., as a sales engineer handling industrial equipment. After retirement in 1982 he continued to work independently designing and servicing special controls for pumps and compressors.

In the 1950s, Mr. Crow served on the Groton School Committee during planning and construction of the town's new High School, which today houses the Middle School. Later he served on the Building Committee for the Groton Police Station.

Mr. Crow was continuously associated with the First Parish Unitarian Church after his arrival in Groton in November 1948. For many years he served as Treasurer of the church.

On June 3, 1995, Mr. Crow was remarried to Marie Theresa Dupuis Ragot in the First Parish Unitarian Church of Groton. He was father to Ms. Ragot's children Jean-Noel and wife Dedra Ragot, and Katherine Ragot, and grandfather to their children Zachary Omer, Sebastian Ludovic, Sophia Leone and Oceana Angelique.

Family and friends will gather to honor and remember Mr. Crow on Saturday, September 16 at 11:00 am at the First Parish in Groton, 1 Powerhouse Road, Groton.