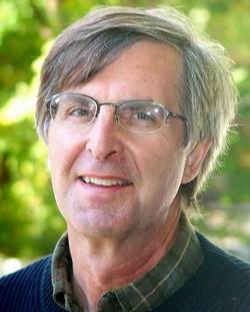 Thomas Vincent Sikina, 72, passed away in his home on October 28, ending his year-long battle with cancer.

Tom was born in Philadelphia, Pennsylvania on July 24, 1950, the eldest son of Tom and Betty (Brown) Sikina. He grew up outside Philadelphia with his younger siblings–brothers John and Eddie, and sisters Marlene, Rosaleen, and Maryann.

Tom studied electrical engineering at Pennsylvania State University. Upon graduating, he embarked on a soul searching journey across the country, traveling by bike from Philadelphia to Oregon, then South to Mexico, and eventually returning to Pennsylvania where he began work at a small engineering firm.

By 1976, Tom had returned to school to study horticulture, while also farming five acres of vegetables and working as an orderly at Bucks County Neshaminy Manor nursing home. It was here that he met Heidi Lugosch, another student with a penchant for light chaos and good humor. Tom’s fondness for order and logic notwithstanding, the two were soon inseparable.

Tom and Heidi were married in 1979, by which time Tom had realized that engineering was his true calling. He obtained his Master’s Degree in Electrical Engineering from Drexel University, and then in 1984 the pair moved briefly to southern California, when Tom was offered an engineering position at ITT-Gilfillan. It was in this role that Tom first began his study of phased array antennas, a subject that would go on to define much of the rest of his career. In 1986, Tom and Heidi returned to the East Coast, settling in the Boston area, where they eventually bought their house in Acton, MA, which would be the family’s home for the next three decades.

In 1989, Tom began work at Raytheon, where he remained for the rest of his career, finally retiring in September 2022. In 1993, after multiple years of night classes, Tom also obtained his MBA from Boston University. Once asked how he first became interested in engineering, Tom said, “Like many young people, I wanted to understand how the world worked. Engineering has consistently offered answers, theories, and possibilities to pursue.”

Tom’s contribution to antenna engineering was substantial. He authored 53 patents and numerous IEEE publications, and was profiled in Microwave Journal as the keynote speaker for the 2016 Electronic Design Innovation Conference in Boston, MA. Most importantly for Tom, he began teaching as an adjunct professor of engineering at UMass Lowell in 2015. Tom taught multiple courses in microwave engineering and RF design, worked with faculty, staff, and students at the Raytheon UMass Lowell Research Institute, and served as a capstone advisor for engineering students. In recent years, Tom also worked to document his course teachings and phased array antenna concepts in a book, which will be published posthumously.

Education was a driving force for Tom for most of his life. He saw his own education as a pivotal factor in his ability to contribute to the world around him, so the opportunity to teach was an incredible honor for him. He spent countless hours preparing his courses and always looked forward to student questions and active class discussions. In an online review, one student described Tom’s course as the single best class they had ever taken. Tom would have been thrilled. He was motivated by the potential impact of young engineers in the world of thought and discovery. Tom’s request to all his colleagues and students was dauntingly simple: “Follow your dreams and ideals to make this a better world.”

In 2012, Tom and Heidi moved to Harvard, MA, where they built a fully solarized, net-zero energy home, which was an important part of Tom’s personal efforts to advance clean energy technologies and contribute to efforts to combat climate change. Just as important, in Harvard Tom and Heidi found a wonderful community of friends and neighbors, who were an incredible source of support as Tom’s health declined in his last months.

Tom leaves behind his wife of 43 years, Heidi, his five younger siblings, and his two children, Sophie and Luke.

To honor Tom’s memory, his family is holding a celebration of his life on Saturday November 12 from 12-2pm upstairs at the Harvard General Store (1 Still River Rd., Harvard, MA). All who knew Tom are welcome.