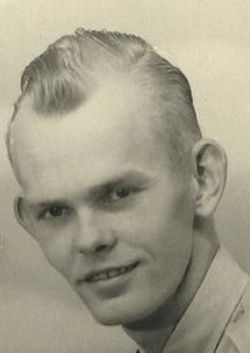 Johnson of Littleton, William Johnson, died on Oct 27, 2015 at Life Care of Nashoba Valley, He was born in Springfield, MA on April 20, 1930 son of the late, Rudolf and Violet (Bell) Johnson . He grew up in Lowell and graduated from the Lowell School System and later attended Lowell Tech. Mr. Johnson served in the U.S Air Force during the Korean Conflict where he repaired airplanes in Bermuda.
He worked as a plastics engineer, for Sanders Corp which is now BAE and AVCO in Lowell for many years. He was involved with developing the heat shield for the Apollo Mission enabling them to get back to earth. He has made his home in Lowell, Amesbury, Chelmsford and most recently Littleton since 1984. He also enjoyed building boats and model airplanes.
His survivors include his wife Leah (Melanson) Johnson of Littleton, His children Dale Johnson of Woburn, Diana Johnson of Sandwich, Donna Harrison of Nashua, and Darlene Johnson of Lynn, Also survived by 8 Grandchildren. The family will receive relatives and friends at the Badger Funeral Home, 347 King Street, Littleton, MA on Monday Nov 2, 2015 from 4-8 pm.